Osze has an easily recognised style and has been widely published in the commercial press - for example in the 'Meatmen' series of comic anthologies. He always draws big, muscular men like the engineer depicted in 'The Basement' title page below. 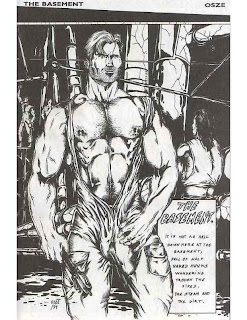 
This is a raunchy picture which captures young masculinity very well and I like it, not least for the cock-hugging dungarees. The subject's facial features (e.g. nose and mouth) are strangely undersized whereas the arm and body muscles (and other equipment of course!) are highly exaggerated. These are perfectly legitimate artistic techniques, but there's a hardness about the muscle shadowing that to me seems to somehow obscure the sensuality and shape of the body. The artist Cavelo also does this and I struggle with his work too. 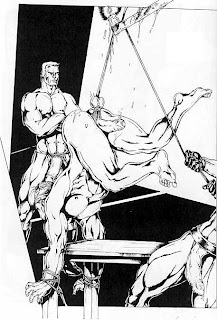 In this Chandelier torture above Osze captures the drama of the situation, the victim's indignity and his pain amazingly well. The eye is drawn immediately to the 'attached' end of the slanting rope which forms one corner of a classic triangle shape and this composition creates a visual 'upwards' signal too. I find it fascinating how the detail of the chandelier is lovingly, precisely crafted in this picture - in contrast to the rather casual treatment of the figure in the background. The mechanics of directing the dripping candle wax onto it's target appear to defy gravity but Osze neatly introduces a separate slanting background wall to deceive the eye. 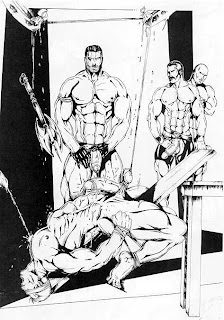 The second example is equally Gothic in concept. The threat from the vicious-looking 'Pit and the Pendulum' axe is probably less severe than it first appears (as long as that rope holds out!) The blindfolded victim can't actually see it of course, but it forms part of an interesting use of slanting lines, including also a jet of recycled beer, all angled towards the captive at the focus of the composition, emphasising his helpless isolation.

There is an entry for Osze at Tom of Finland Foundation but the link doesn't seem to work. Googling 'Osze gay artist' turns up examples posted on other blogs although some I looked at were corrupted as well. Information from readers welcome

All the things you find objectionable are exactly what contributes to the verve and intensity of the pantomime. The sharpness of the forms (exaggerated as they are), the over developed muscles, the scale of the heads vis a vis the figures' overall height, (coupled with the shortened calves), and finally the flattened facial structures create a dramatic tension, which is sustained by the activities of the figures.

I think you are misrepresenting what I wrote, but I welcome the comment. We seem to agree about the outcome, if not the mechanics. Thank you.