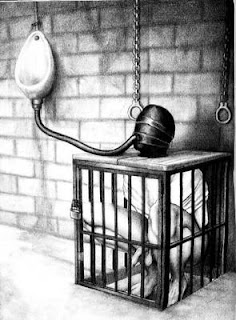 This picture is something of a classic and regularly surfaces in art groups, I have it under the name Nou but I don't really know if that is the correct attribution, nor do I have any other work by him.

'The caged man' is a popular fetish theme but not that easy to make into a memorable visual image. The bars get in the way of course and there's a temptation to include additional bondage which, logically speaking, renders the cage superfluous. If you do away with the bondage, sizing the cage is an issue. Too large and the captive doesn't seem constrained enough, (think of Tom's prison cells which don't imprison so much as separate the prisoner and his jailor). Make the cage too small and the prisoner has to sit, a position which is altogether too comfortable, or else his head and legs fold into his body, hiding the most attractive features.

Nou's stroke of genius is to allow the prisoner's head to project from the top of the cage making it an anchoring device and allowing the crouching body position to be clearly seen. The detailing of the feet and legs is accomplished. The black mummy-like mask, hides the face and personality of the captive, but combines with the cage to make a powerful visual statement. I'm not sure many men would be able to replenish the urinal at that height - but then deception is part of the power of drawn art.