Mahoney's work is very simply summed up - the crucifixion of naked men. Within this narrow field he explores the detailed process by which this form of torture and execution is carried out. 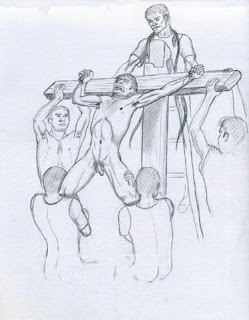 The proceedings are nearly always seen from a distance, often looking down over the heads of the spectators. The reactions of the victims as the punishment proceeds - fear, horror, pain, despair - are portrayed quite well within the limitations of the drawing's scale but naturally they don't have the same impact as Mack's more intimate close-ups. 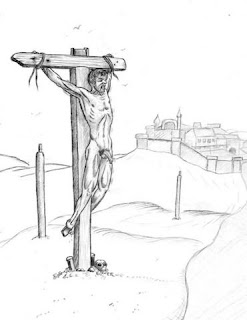 Mahoney - Outside the City Walls
Apart from facial expressions, the victim's reactions are self contained for the most part and we are simply witnessing the effects of a punishment sanctioned by the community (sometimes evidenced by the presence of uniformed executioners or plaques naming the victim's crime). The settings are detached from our reality, showing arid landscapes and walled cities, sometimes Roman soldiers and men in turbans are present. This biblical setting may be simply intended to give realism or perhaps suggest that the victim has met an undeserved but inevitable fate. 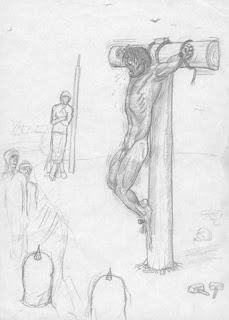 The example shown above is a bit of an exception, the victim's unruly hair suggests a villainous character while the shading of his muscular body gives it volume and sexuality. He struggles to escape, shaking the whole cross. The spittle flying from his mouth suggests belligerent defiance or panic. The soldiers look on with contemptuous, casual interest.


There's a good selection of his work at the MCR Group

To see earlier posts in this series click A-Z in the label list below
Posted by Mitchell at 13:20