Every so often a cartoonist manages to create a caricature which is sexy despite it's humorous essence. Mike Kuchar's men are long limbed and slender with pert bottoms and well defined muscularity but they often seem to exude an air of casual clumsiness and sexual naivety like the adolescent whose body is outgrowing his brain. 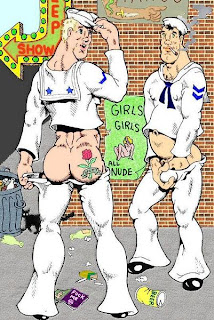 Kuchar - Sailor's Tattoo
The faces of the sailors have big 'baby' eyes which contrast with their very grown up bulky jaws, thick necks and broken noses. Their facial expressions suggest one of them is more naïve than the other. 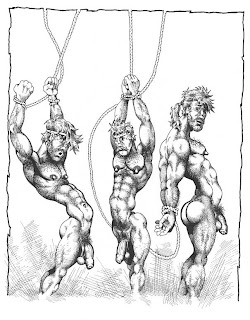 Kuchar - Three Captives
Three captives from the Buccaneers series show the same effect in a different way, the slouched bodies and prominent stomachs, even the flaccid organs suggest resignation and a lack of energy, but there's a sort of animal grace in the lean muscularity and the straight-legged pose which accentuates their buttocks. There are plenty of older men in his pictures but they seem to be just as vulnerable and confused as the younger ones - look at the facial expressions in whipping (below) - they both seem surprised - but not very much! 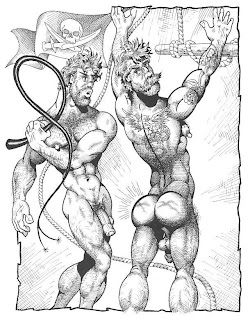 Kuchar - Whipping
Kuchar has a keen eye for the more subtle essences of maleness, the facial and body features mentioned above but also the accentuated nipples and navels and the smatterings of hair on face and body. I particularly like the younger man's face in the whipping scene from Buccaneers. The economical, unfussy style gives these figures a degree of sensuality which is only held in check by the caricaturing of their bodies.
.

Kuchar - Crucifixion (detail)
.
The final picture (from the series 'And still they come') is more representational - and a good deal less frivolous - but, interestingly, the victims seem equally resigned to their fate. There's a neat flavour of 'buddies sharing misfortune' here, but it's daring and challenging to show it in a static picture. The dramatic upward-looking viewpoint here is quite impressive.

Sorry no link info but a search of the GMBA or Gaytoons will turn up more examples. I'd welcome link information from readers
Readers are welcome to contribute their own comments - even if they differ from mine!
For earlier examples in this series click on the A-Z label below
Posted by Mitchell at 08:59

Love your artwork, love your blog.
I am an artist also, I do oil landscapes, but you are good at that kine of illustrations...excellent!
keep it up.
saludos,
raulito
http://fromtop2bttm.blogspot.com/