Willem Kok (aka Dorus) started publishing pictures at the same time Tom of Finland and Etienne were around their peak and his early work (as Dorus) shows their influence in the solid jaw lines and placing of distant, background observers for example. 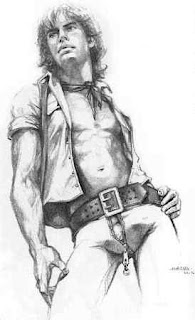 Kok - Unzipped
Later on he evolved a more distinctive style of his own in which the skin musculature is depicted by in great detail by a delicate tracery of lines. Detailing individual muscles requires great delicacy of shading or else they become too prominent but Kok pulls it off better than most and creates the impression of a fine translucent skin through which the network of veins and flesh of the muscles can been seen. 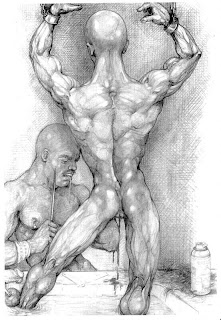 Kok -Pin
This interest in skin seems to be reflected also in a preoccupation with shaving (of both head and body) in his later pictures. I find the end result beautiful but a little spooky. However, there is no gain-saying his technique which is formidable. 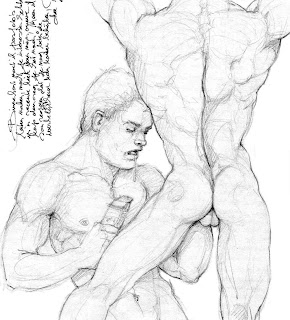 Kok - Shaving
His models are well muscled but not absurdly so, some of the faces are distinctly attractive, almost in the Harry Bush college boy vein but with fleshy lips and jutting jaws. There's a nice example at the link below. Sexual organs are well detailed but generally realistic except for a couple of Tom of Finland pastiches where crowds of young men worship at the altar of mega-penis.
The subject matter becomes quite intense in later pictures with piercing and cutting scenarios made all the more chilling by the detailed depiction of dungeons and 'operating tables' dripping with body fluids. Not for faint hearts.

There is a good introduction to Kok at Delft Boys
Readers are welcome to contribute their own comments - even if they differ from mine!
For earlier examples in this series click on the A-Z label below
Posted by Mitchell at 23:57