With Funayama we enter a dark, dark world of bondage used as a vehicle for abuse, torture, mutilation and even cannibalism. His pictures often show bloody wounds and the atmosphere is filled with menace and fear which can be both exciting and repulsive at the same time. Not exactly my cup of tea but he has produced some excellent bondage images of which I include a selection here.
. 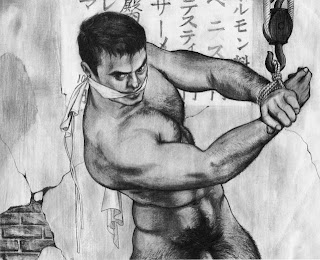 You can see he has a well developed technique and the rendering of details like body hair and clothing is excellent. In the hogtie picture below the relative positioning and the sizes of the different characters are not true to life but adjusted to fit into the composition. He does it so well that this is not obvious to the viewer. Tom of Finland had a similar ability to disguise the impossible. 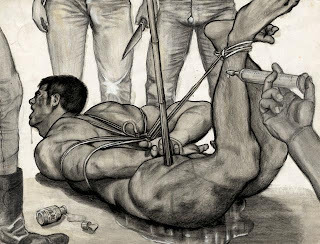 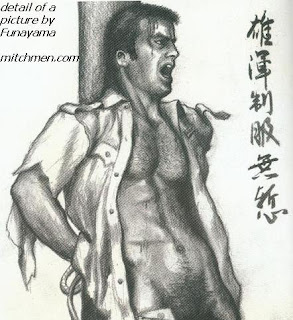 Not all of Funayama’s faces are as attractive as the ones shown here. They all tend to have dark edged, staring eyes which are quite disturbing but entirely in keeping with the dark subject matter of the pictures.
.

There are samples of Funayama’s work at http://www.jeunesasianart.com/index.html which is also a good reference source for many other Japanese fetish artists