Facchini is a relatively new arrival and his style is still developing but his pictures have made a great impact on me. He shows men in bondage being chastised by authority. They are not pretty boys but adult men with attractive physiques. They are often hairy but their hair (including head hair) is depicted as though it is growing back after having been shaved off. 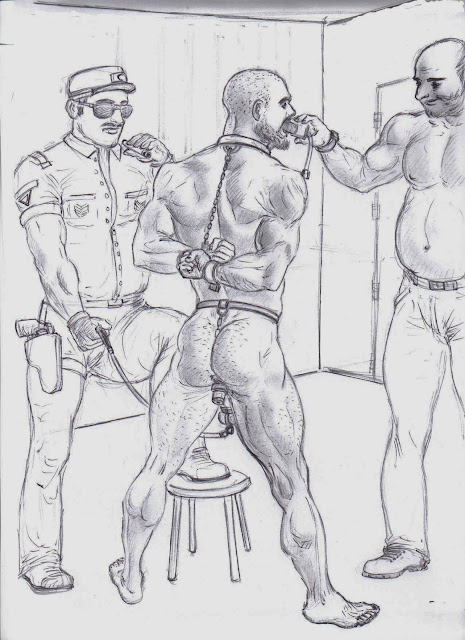 
Facchini depicts tortures and medical treatments but he also does scenes like the prisoner being prepared for his punishment (above). The guards are unattractive and casual creating a sense of an uncaring, unstoppable bureaucratic process. The prisoner has no hope.
. 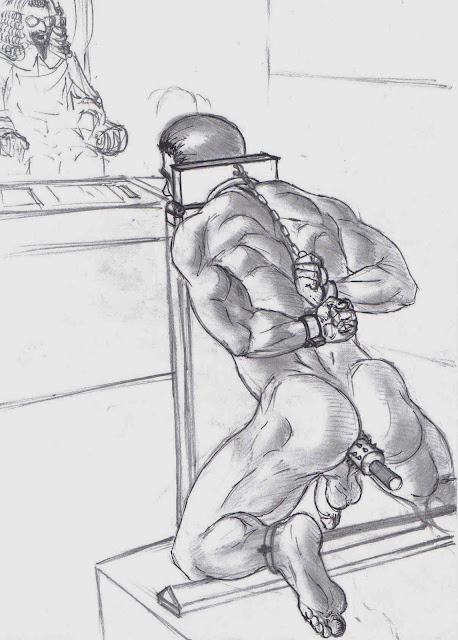 Facchini - On Your Knees

The prisoner kneeling before the judge is a particular favourite of mine. It is not unusual for prisoners to wear restraints for court appearances but this degree of immobilisation and bondage suggests that the prisoner is violent and unpredictable. This enables us to enjoy his humiliation with a clear conscience. The authorities are demonstrating firmness and resolve forcing him to bow before a judge whose theatrical garb he would no doubt ridicule if he were free.That wedge under his shins is a nice, nasty touch!
.
Facchini’s technique could fairly be described as unpolished, but the mixture of sketchy backgrounds and more detailed primary figures is actually quite effective.
.
Facchini doesn’t have a website but publishes pictures from time to time at the GMBA Google group which I can recommend as a constant source of fetish art of all sorts. Current link in sidebar.

If you want to read the earlier articles in this series, click on the A-Z label below