The pictures of MacLane and Art Bob depict the fascination with sailors in the 50’s.
In the first picture (44), MacLane presents the sailors' masculinity
by portraying them in poses which echo heroic Greek statues. 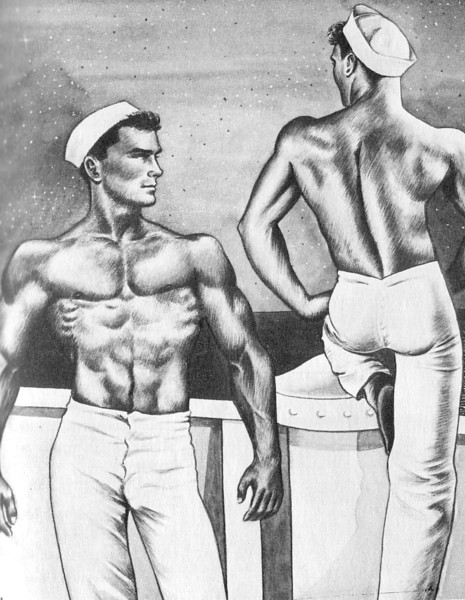 At first glance it’s a fairly bland and dated ‘pin up’ picture.
But look closer - the sailor’s expression and depiction of their clothing
with restrained but lovingly drawn bulges, bring the image to life in a quite startling way.

MacLane’s second picture here (45) is an informal visualisation of life on board
depicting bored, youthful sailors living together. 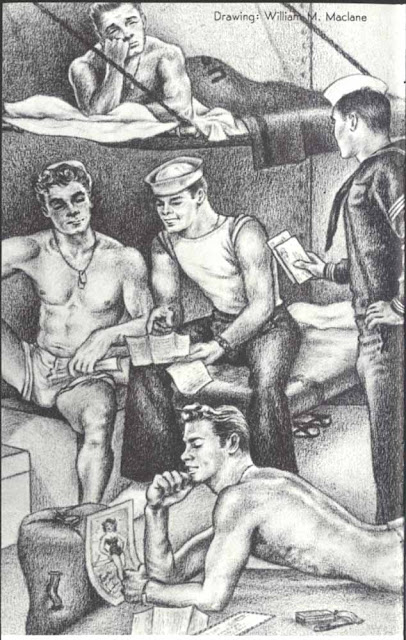 The uniform of the ’postman’ on the right is nicely drawn and even shows a little bulge,
but the depiction of most of the figures is not particularly erotic in style
- apart from the handsome foreground figure, whose nudity is heightened
by sweaty highlighting and just visible underwear
which is clearly not providing much modesty at the front.
The eye is drawn to this hunky young man
who is clearly thinking lustful thoughts about his girl back home.
This is unnoticed by his companions but we can secretly tap into his heightened sexual state.
*
MacLane’s subtlety was dictated by the laws of the time of course,
but Art Bob is more adventurous.
In Idols (46) his sailor is the object of desire for both a man and a woman. 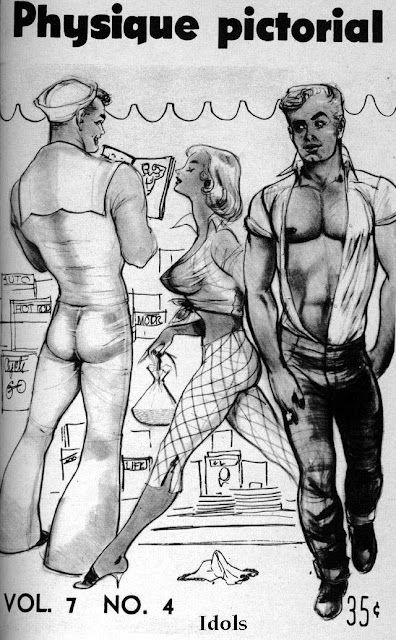 Strangely enough the woman and the man both seem to be in a different class of sophistication and attractiveness compared with the sailor who apart from pert cheeks is rather frumpy looking. Perhaps Art Bob thought the uniform was all that was needed! The competition is fierce between the two coquettes. The woman even appears to have dropped a lace handkerchief as a ploy - although the physics of the situation suggest it was there before she arrived. No matter, the outcome is a foregone conclusion since the sailor is reading a male muscle magazine.
The secret language of gays triumphs over heterosexual womanly wiles! 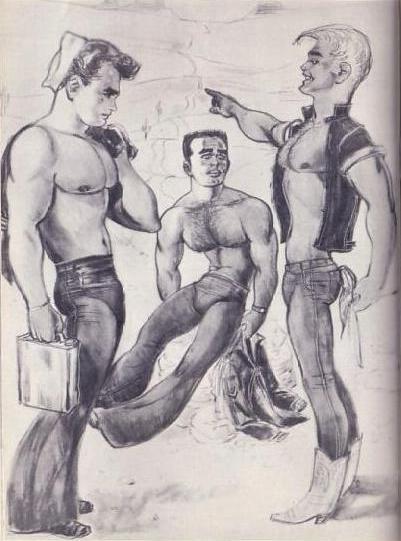 The final picture is another Art Bob number (47). Another complex story is being told. Two sailors seem to be stranded in the desert with their kitbags and a cowboy is directing one of them to the nearest gas station - which is clearly not near! Quite why the middle sailor is so alarmed is unclear. Perhaps the long walk ahead or the camp attire of the cowboy, maybe he is conversant with the handkerchief code and doesn’t fancy being alone with him. The cowboy is holding something else in his hand which might explain more (the reins of his horse?) but I'm nott sure what it is. I love the depiction of the sailors in this picture - both the butch seated one and the boyish doll-like one on the left. This artist too shows his love of the sexiness of the sailors caps and trousers in his depiction of them.

Read this series from episode 1
Posted by Mitchell at 15:25

Hi. I've been looking for an Art Bob drawing of a beefy, older wrestler holding a young wrestler in an across-the-shoulders torture rack hold. Sentimental reasons. Any suggestions on links, etc?