Mitchell's A to Z of Male Fetish Artists - Drubskin (Revised 2017)

Drubskin is the last of the D's. He's another cartoonist and often depicts slim men with skinhead haircuts dressed in the regulation jeans and braces. The menace often associated with this stereotype comes across quite clearly in this image.

Drubskin depicts this skinhead's aggressive character in a gang-oriented, pecking order scenario. His casual hardness, standing on his submissive partners arm to keep him boot-licking, while at the same time giving him a contemptuous golden shower is a much more powerful statement than the cartoon style leads you to expect. The glimpse of  ass crack seems to imply that this chaps humiliation will have a sexual dimension too. The emphasised boots in the foreground are Drubskin's trademark. Notice the discarded tube of glue on the floor.

This picture seems to show skinhead aggression directed at a traditional target, a rebel of a different ilk which I might broadly label as 'the hippie'. Notice he is not wearing any boots so he's not in the gang, well not yet. Bound to a crude wooden throne, his head is forcibly shaved of dreadlocks. There's a playful air, but it's not shared by the captive and in the left-most hand there's a hint that this scene too may have a sexual denouement.

This last example of the skinhead gang culture is much more benign, romantic almost. It's a scene of (advanced) sexual experimentation in which one participant at least seems to be being inducted. The tattooed man with him is decidedly cute! Drubskin introduces sock worship here and it doesn't look like they were clean-on this morning! I like the way the hard-nut, mohican'd fister uses an upholstered stool to spare his knees from the rigours of the bare wooden floor.
Artistically, there's a particularly pleasing balance in this composition.

It's natural for sportsmen to idolise their coach, but the association with sport and sweaty endeavours lends this sock-led encounter a very pungent aroma. A cynic might read this as the Coach stays sober, but gets his boys drunk for nefarious purposes (as if!). The story-telling in some of Drubskin's pictures is a great plus point.

There's no suggestion of dastardly exploitation here, an almost-vanilla exploration of sportsman sex. It's the rugby ingredient that draws me to it, that and the bright yellow kit which helps make this a very pretty image. 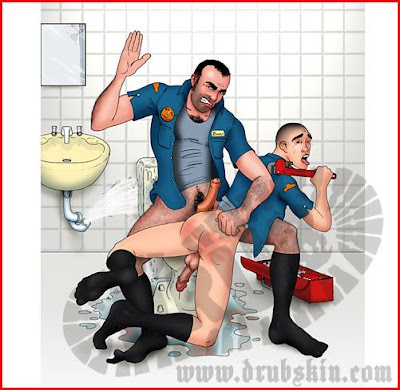 This scenario seems less common than you might expect in gay erotica. Most artists seem content with the conventional power hierarchy, so cop screws hapless villain. Drubskin upends that and the cop too, but apart from the poised gun, there's not a lot of evidence that he's that reluctant a participant. The hoods give the two villains an air of menace and mystery but they are device that's not that effective for me for some reason.

I've put this image in last position because it is rather surprising. A rather dishy-looking skin is busily servicing a man from a different planet. You might see this as refreshingly non-ageist and so it is. But the characterisation detail of the older man seems to be telling us that he's an unappealing, oafish slob who hasn't looked at himself in the mirror for a long time. Implying that the boy's interest resides in much more basic matters. It's a logical extension of the the other fetish practices depicted by the artist, thought-provoking but challenging to less adventurous souls.

For more articles in this series click on the A-Z label below or search for specific artists using the index page or search boxes (top right)
Posted by Mitchell at 09:02