Mitchell's A to Z of Male Fetish Artists - De Souza

I have only discovered De Souza recently but though he may be little known he's well worth a place in the mitchmen A-Z. His pictures show men tied up and abducted for torture or sexual exploitation. They have a Latin appearance and are often past the first flush of youth. Suits and ties feature frequently whilst the abductors often wear balaclavas. This latter iconography is very effective in creating atmosphere - perhaps because it belongs to the present day and is therefore loaded with real life associations. Surprisingly balaclavas are rarely encountered in the normal run of fetish art. Nor are suits for that matter and it is nice to see an artist allowing his victims to retain their clothes if only for a while. They help the story telling so much! 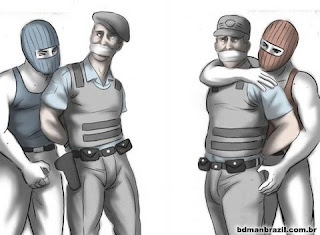 The pictures are simply drawn with bold cartoon-like outlines but sophisticated photographic shading. I particularly like the attention given to facial expressions which add to the effect by conveying emotions and intents to the figures. My favourites are the mummification scenes which show the helpless horror of the victim as he is wrapped for removal. 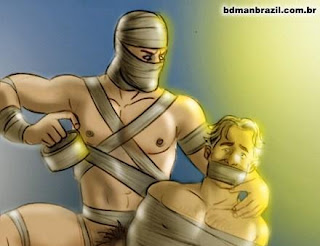 The pictures reference http://bdmanbrazil.com.br/ but I am not a member of this site and cannot verify if the pictures are still there. There also used to be a gallery on the 'Biff and Brad' Yahoo Group but this seems to have disappeared now. I'd welcome any information on this.