Mitchell's A to Z of Fetish Artists - Dante 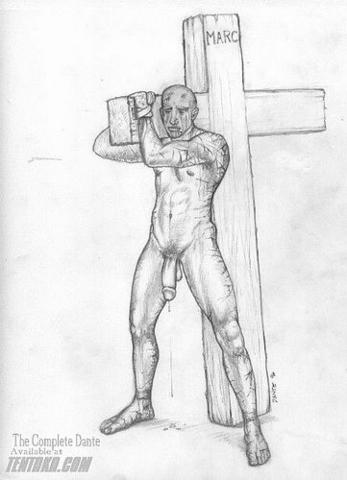 Dante is another artist who specialises in the more gruesome fetishes - cutting, nails etc - my illustration only hints at the scope of his subjects. Suffice to say he doesn't do things by halves! The better drawings are in a straight-forward representational style without artful elaboration. Unlike some artists the characters depicted get as much attention as the mechanics of their tortures and on the whole are attractive young men. Of course this adds extra poignancy to their suffering, although it must be said they seem to endure what would be excruciating pain with great stoicism. I warm to his story telling technique - placing items around the picture which tell us about the victim and where he is. In some picture the victims themselves are labelled as fags or wear gay insignia which, in my view, is not so good. Respect begins with the self.

Some of my pictures reference www.tentaka.com but I have been unable to verify if Dante's work is shown there (but see comment below).
Posted by Mitchell at 09:04

The images are scans from his original drawings and as are a complete collection of all of his works - at least all he sent me.