Mitchell's A to Z of Fetish Artists - Chris

I have included Chris (Musclemaxx) in this survey even though his fetish credentials are a bit sketchy simply because I like his work. He features big muscular men indulging in sex and there are usually domination overtones and sometimes mild bondage motifs. The men are generally clothed in skinhead or gym clothing which is stretched tight by their greatly exaggerated musculature. 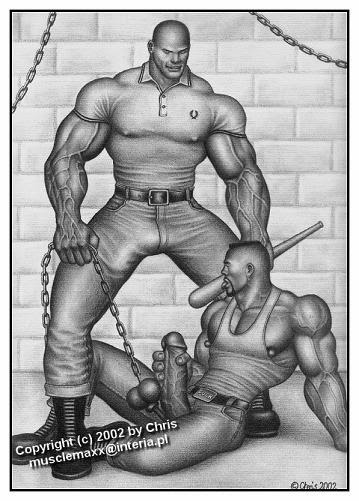 The general style of shading and abundance of detail in the clothing etc is very reminiscent of Tom of Finland (not to mention the wildly exaggerated masculine endowments). Some of the backgrounds of trees and fences look as though they are plucked straight out of Tom's work. However the faces he shows are much more interesting than Tom's. The over developed body proportions and small heads probably limit the appeal of Chris's work but I love the sensual feel his pictures have. One cannot but admire the intricate detailing but sadly this means that new works are few and far between.

More at http://www.pridesites.com/fetish/musclemaxx/index.html
Posted by Mitchell at 15:27