Mitchell's A to Z of Fetish Artists - Copper 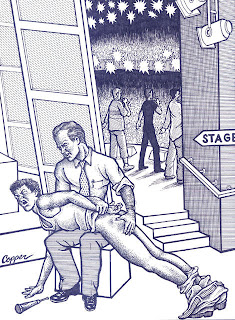 Copper is another spanking specialist. At first glance his pictures look like cartoons because of the thick lines that delineate the figures but in fact closer inspection reveals a sophisticated and confident technique utilising a variety of graphical shading methods. Some of his pictures are formed around rather impressive figure studies. The story telling is often strong in Copper's pictures which always earns Mitchell's seal of approval. The example here brings out the psychological humiliation of the submission as much as the excitement of the mechanics of the process.