At first sight this looks like a crucifixion image but the handsome captive is actually spread-eagled between two pillars. The proliferation of arcane symbols tell you that this is an artist who majors in mystical fantasy.

He is a highly accomplished draughtsman with a keen eye for the homoerotic.
Nearly all of his subjects are scantily clad men representing the characters of the fantasy universe,
this is a rare one who looks relatively normal (if you don't count the wings).

This character is one of 'The Fae'

His butch face with a shock of blond hair, chin stubble and general hairiness are most un-fairy-like but appropriate enough for his role as a 'defender', although the artist hastens to assure us that he prefers ploughshares and ecology to swords.

Despite his butch face he has something intriguingly feminine about him.
Not least those flimsy, sagging briefs and pouty lips.

This seems like a nice boy, but his horns and black wings
reflect darker tendencies, a desire to control in fact.
Here he's seen summoning something in The Shadowlands
that might have better been left unsummoned.
I like the mesh-like loincloth he's wearing,
a bit risky though in this situation. 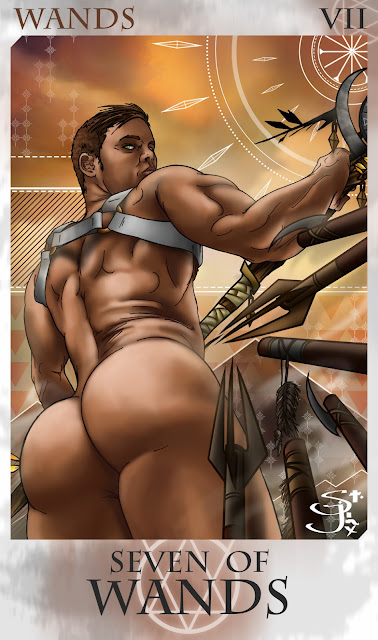 St Jinx's output also includes a version of the Tarot pack and his own Arcana too
I've never understood 'Wands' but I rather like the juxtaposition here
of plump buttocks and sharp, pointy objects.
This picture has a touch of Jotto in it's style
~
St Jinx main site seems to be St Jinx.com but it's hard work to navigate through the images there.
The St Jinx at Instagram site is more accessible and has some interesting, wider-ranging stuff.
There's a selection of older work by St Jinx @Deviant Art
Search engines bring up plenty of results too thanks to the artist's distinctive name which they can't translate into an unsought shopping opportunity.
Posted by Mitchell at 23:46