The Art of Homoeros - 1 'Beefcake Boys'

If you review this artist's gallery at Deviant Art you will immediately see that he enjoys creating different 'models', often naming them (this is Evandro), then dressing them in various clothes - and undressing them - while placing them in different locations.  If this sounds like playing with dolls, many of his creations do have a certain doll-like quality about them but his preoccupation with this activity reflects a fascination with the capabilities of the render software and a certain interest in exercising power over his male creations. This is quite different to the nurturing pleasure girls get from their dolls! - or is it?

Many render artists (even Ulf!) struggle with creating clothing from scratch, often resulting in 'painted on' garments or shapeless baggies. Homoeros gets round the problem neatly in this example by photographically borrowing a real man's jeans for his model to wear.

This tribute to the art of 'Matt' shows a deeper artistic sensibility and provides an opportunity to show off his vision of a man's muscular back in a very authentic pose, spiced with a tantalising dose of  'builders bum'. Although his men are always ultimately revealed to have generous, thick endowments and cute bubble butts, he often seems disinclined to let them show very much through their clothing - in stark contrast to Matt's cowboy in the picture on the wall before him. 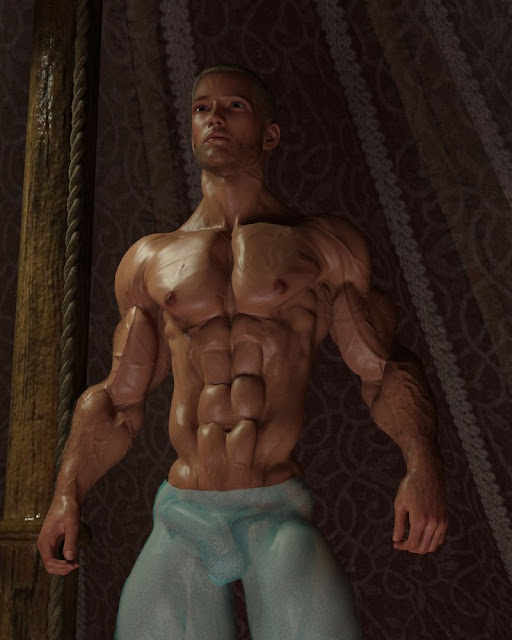 That can't be said of this image! There are situations where the 'painted on' render look is entirely appropriate. This depiction of a figure in tights compares favourably with the cruder display of Tom of Finland's acrobats, discussed here recently. It's not exactly understated, but is a more believable fantasy of a performing artist than Tom's one. It shows that this artist 'gets' tights as being both revealing and restraining and wouldn't you like to stand close to him! The sense of manly strength created by the simple expedient of an upward looking viewpoint is striking.


Making outer garments disappear leaving underwear and the 'tools of the trade' behind is a long-standing, favourite device for beefcake and underwear photographers. It never fails to create the shock of the unfamiliar and imparts to the model great sexual confidence and daring. This military example from Homoeros is eye-catching and memorable thanks to the 'Miss Saigon' helicopter wow-factor and the artist's enviable eye for colour and co-ordination, which is also evident in the other images included in this article. There's a subtle muscularity and balance in this soldier's body which is pleasing and the drooping belt attracts us to his other nice feature. You can have some fun spotting the 'joins' in this picture if you look closer. 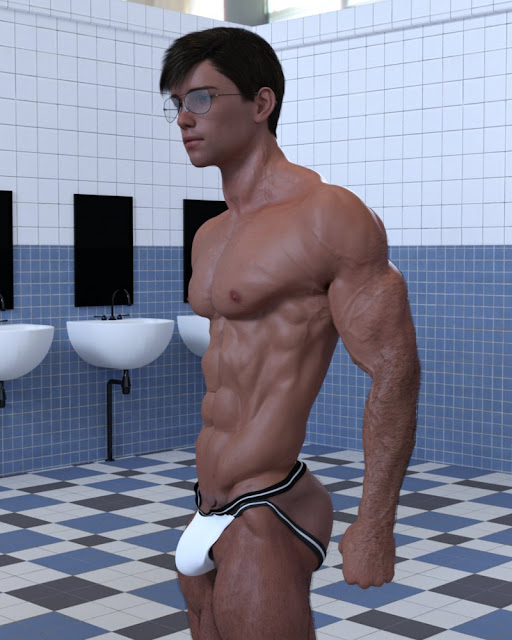 I've included this example because I like the face and slender curving body. It highlights this artist's preference for narrow waists. The jockstrap is not usually suited to slim, clean cut boys (see my article here) but narrower supporting straps definitely help. Fortunately this lad sports an improbably large backside ideally suited to being 'harnessed' by the jock's open-back design. His pouch suggests some bulky assets at the front with the diving frontal lines making for an almost immodest display quite at variance with Ronnie's innocent-looking face. The rendering of the straps is not entirely successful, but this fortuitously creates the, not entirely unwelcome impression, that the garment is about to fall off - a risky situation in a young male locker room.

This model, unnamed by the artist, is of a more mature mould, with a striking face that looks unexpectedly real and (with a hint of 5 o'clock shadow) very appealing. His body is once again slim with deep cut muscular definition bringing out even the minor muscle groups and decorated with veiny detail. He gazes out of the window as though waiting for someone, apparently intending to greet them naked (insert your own fantasy here!). In this picture you get a chance here to see how Homoeros views a man's sexual equipment and, curiously, his cock is the exact opposite of his body - chunky, thick and very smooth
- and I might add, in the words of mass market restaurant chains, it's succulent too.

Combined with the slightly dazed look and unsteady pose this model steers perilously close to stereotypical representations of Dr Frankenstein's creature. Perhaps that is what Homoeros intended, modelling men of his own invention is exactly the way he approaches his art. If so this one is definitely an improvement on the original, a monster in size only.

The ropes on the man's wrists and the winching equipment behind him offer a more prosaic but exciting explanation of his downcast, groggy look. Perhaps of his ultra slim waist too, if that's not being too disrespectful. This artist's control over his inventions goes beyond dressing-up games, it has a darker side too and that is what I shall explore in the remainder of these articles about him.