There's a bit of mystery surrounding the identity of this artist whose work I believe dates from the early 2000's. He has an accomplished, distinctive style but the most interesting element of his work is the focus on the portrayal of black men who are severely under-represented in my mitchmen A-Z of fetish artist series and gay art generally.
. 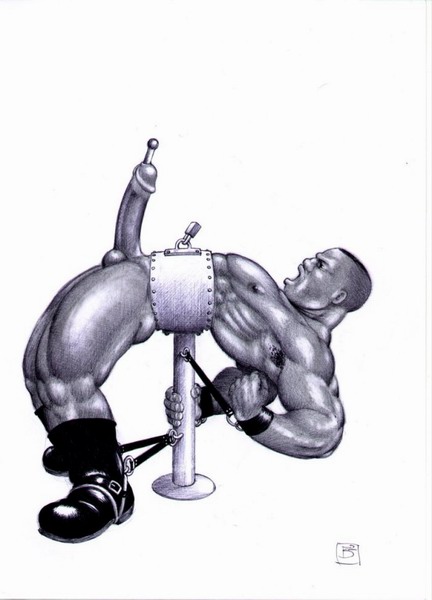 This is a highly original idea for bondage furniture.
The padlocked metal 'belt' provides a single point of restraint that is completely inescapable and if the tethering is released it allows all manner of access to the unfortunate who is locked up in it.
More flexible than a sling but less comfortable for the occupant. 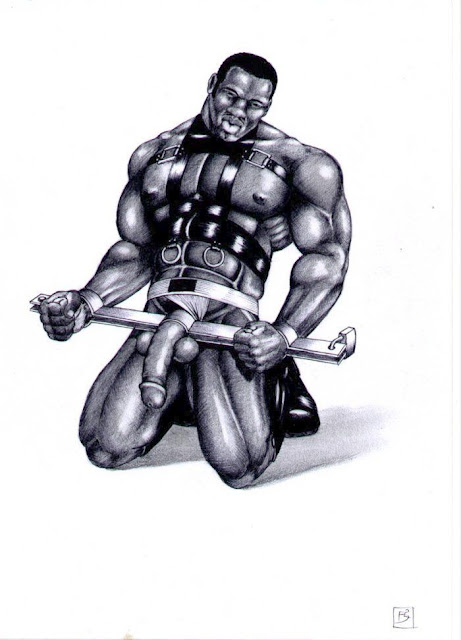 There's more metal ware in this image although I fear this design would be impractical for a man with massively developed thighs like this. The unusual, grid-like pattern of the leather body harness resembles the crossed bars of a prison cell and seems to firmly encase the torso rather than plumping out the juicy bits as the classic harness does.

Subjected to this heavyweight restraint, the captive has a curious look of expectant resignation, a sort of submissive, "OK, so you finally got me" look. B2's faces are authentically African but are more idealised than Belasco's 'street' guys with softly rounded features and tidy hair
.
I suppose the idea of tidiness in appearance is exemplified by a man in uniform, particularly a Military Policeman. I usually grumble about sailor caps which look too pristine but I suppose it's an authentic look for this job. We all love a sailor (well I do) but B2's choice of an MP from the Naval branch of the Armed Forces is an unusual one. The detailing of the belt and neatly ironed trousers looks highly authentic so I'm tempted to think there's personal knowledge here (hence all that tidy hair elsewhere?). Military discipline and hierarchy is just as restraining as metal fetters in it's own way and this cop's demanding look, stern and impatient is clearly an order, not an invitation. For the avoidance of doubt  he thumbs towards his dangling baton(s). This is a very assertive portrayal of a black man but essentially drawing on white iconography.
.
This is the only white representative I've found amongst B2's work so it's interesting that he takes such a subservient role. In that respect this image too breaks free from the 'Black men bound' theme we saw in the first two pictures. But while the Navy MP (preceding above) is relatively free of negative stereotyping to most of us, the same cannot be said of a regular cop, so casting a black man in this dominant, abusing role is quite a powerful statement.

The unusual styling of the white man's clothing might suggest that the artist was visualising a fetish encounter rather than a real life situation, but check the cop's right hand and you'll see he is holding a book of tickets and pen. Maybe it's the guy's provocative attire that has earned him the ticket.

The cop's other hand is held palm outwards and notice it has the correct, lighter skin tone ('whiter' I might say if I wanted to suggest complex motives here). This gesture could be interpreted simply as the cop's acceptance of the 'sex instead of a ticket' deal ("OK boy, go ahead"). Or it could be a theatrical underlining to us of his role reversal 'victory'. Or it could also be a statement of intent regarding the white boy's temptingly exposed ass. (While we're on that subject, that baton suddenly looks awfully black).
Anyway the symbolism here is unexpectedly penetrating.

B2's crisp styling of his character's clothing is very apparent in these last two pictures and it echoes the neat and tidy way he sees his men. Even sleazy moments like this seem clean and inoffensive.

That theme of tidiness and cleanliness continues with an attractive prisoner in white vest and socks, chained up in a dungeon waiting to give service. It's easy to visualise him in a suited office job. For now he 's restrained by metal fetters with added riveting which emphasises their strength and pays a compliment in turn to the entrapped power of the captive. The introduction of the convict's ball and chain in the guise of a cock weight suggest there's a degree of historical looking back to more abusive times in all this metalwork.


In this picture the element of humiliation, which runs through all the pictures presented here, is expressed more strongly. There's the obvious self-inflicted, golden shower of course (relying on some imaginative fluid dynamics for direction as well as the delicious, coiled, cock-roping). But there's also a subtly suggested, underlying scenario of kidnap or forcible detention of some sort. For the prisoner here is not presented as a fetish enthusiast, but as a regular guy who wears traditional white underwear and check pattern shirts. The hooped decoration on his chunky socks is vaguely suggestive of construction worker stereotyping from which clues we may deduce that the hook from which he is suspended is not in a secluded dungeon, but on a very public, building site. B2 takes the self-conscious masculinity of workmen and turns against this particular man who presumably is deemed to be in need of taking down a peg or two. In recognition of the change in venue B2 switches to rope restraints.

B2's art is distinctive in style and it's general tidiness and polish looks back to Tom of Finland, another notable portrayer of black characters, but lacking the authenticity of this artist. The originality of B2's fetish images however does not depend at all on this characteristic but the images probably gain from it. He's a welcome latecomer to Mitchell's A-Z of fetish artists

It's tempting to attribute B2's work to the other prominent, black artist, Belasco. It would not entirely surprise me if that were so but there are notable stylistic differences. Belasco's work is generally less polished than these pictures, more cartoon-like. His men are not prettified either, their appearance is infused with ethnicity and a raw, 'ghetto', cultural background that is not at all apparent in B2's work. On a technical level Belasco's anatomy emphasises the shaping of limbs, the thinning at wrist and ankle and the shaply intermediate joints which B2's pictures ignore in the quest for chunkiness. Belasco revels in the shaping of feet, he doesn't hide them in clumpy boots or thick socks.
I'm inclined to discount the Belasco theory but have no other to offer in it's place.

I can't find any trace of B2  on the web, if you know more about his identity or where his work may be found please drop a comment on the form below.


For more articles in this series click on the A-Z label below or search for specific artists using the index page or search boxes (in the navigation banner and top right)
Posted by Mitchell at 09:58