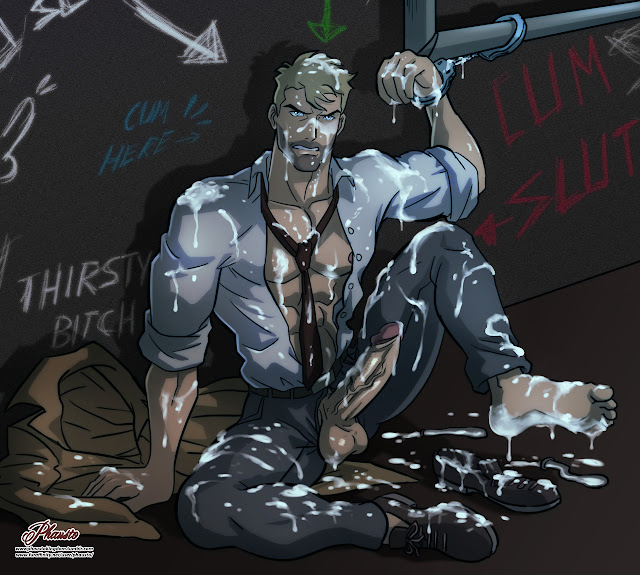 The majority of Phausto's art seems to be preoccupied with fairytales, fantasy lands and is drawn in a disneyesque, comic style which I confess leaves me unstirred. This remarkable exception is a solitary one as far as I can discover (if I find more I'll add them later).

The 'splattering of a captive' is a subject which is quite mundane these days, but the choice of a handsome office worker to be humiliated in this way (and it is a special humiliation when you're still in your working clothes) gives the picture a nice twist and triggers imaginings about how this situation came about.

Did he fall foul of a villainous predator or two in an unfamiliar alley?
Did his office colleaugues decide he needed taking down a peg or two?
Did a cop spare him a ticket in exchange for a speedy discharge?

Whoever the perpetrator was, he lingered to enjoy the victim's foot,
but the victim himself seems to have been turned on by the experience.

His worst humiliation may be yet to come of course,
when a rescuer arrives and he has to explain.
Posted by Mitchell at 09:11