The headscarf has a noble tradition as improvised headwear.
It's frequently associated in popular culture with pirates and brigands so you'd think it would impart something of that renegade panache to any wearer, not least Cody Cummings. 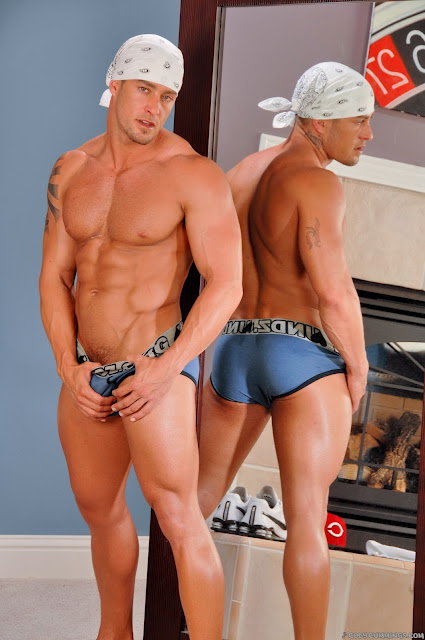 Apparently not.
At least not when it's worn with a less-than-fierce coy 'come-on' look.
I can't help adding that headscarves are also associated with washer women
but perhaps that's being too unfair

I am happy to admit that Cody model achieves considerably better results
with his underwear which greatly rewards close inspection. 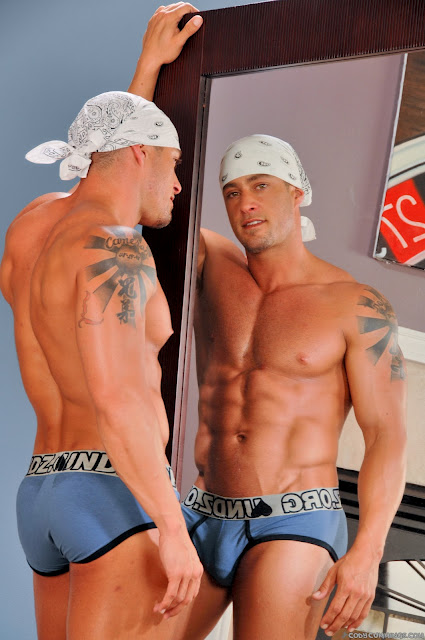 I've always put this model in the 'God's Gift Brigade' on account of the fact that he spends more time looking at the camera than the men he's posing with, even when he's being intimately serviced by them. So it's not entirely unexpected to find him partnering a mirror and making a bit of a fool of himself with his headgear.

(I usually blame the photographer for these faux pas but as a 'Star' model, I imagine this chap's not obliged to follow all those dictates, so he is probably equally culpable here!).

I also mentioned the headscarf as a silly hat in a previous dispatch when it is shown being worn by a wedge victim. Conflating that image with the ones above creates a rather satisfying fantasy.
One that's probably not worthy of me, but never mind.

For more 'God's Gift' Candidates click on the label below
For more silly hats click on 'hats'
Posted by Mitchell at 14:13