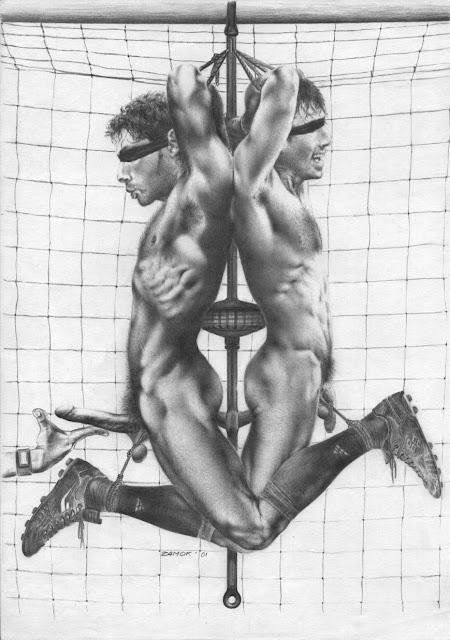 1
He burst onto the scene with a group of bondage images featuring soccer players being given ingenious and humiliating, sexual punishments on the pitch. This location left open the possibility that a crowd of spectators was there to witness their downfall although they are not shown. You can see immediately in this example that this artist has drawing skills of a very high order. The mid-European faces are extremely realistic and vividly conjure up the era when Italy seemed to be the home of vain, overpaid, prima donna players. The anatomical detail is impressively accurate and very seductive, successfully showing muscular definition without breaking up the overall body shape. The touches of body hair are restrained but erotically suggestive, distancing the image from the purely academic. Last but not least, the superbly detailed, vestigial clothing gives these images a classy, erotic embellishment. 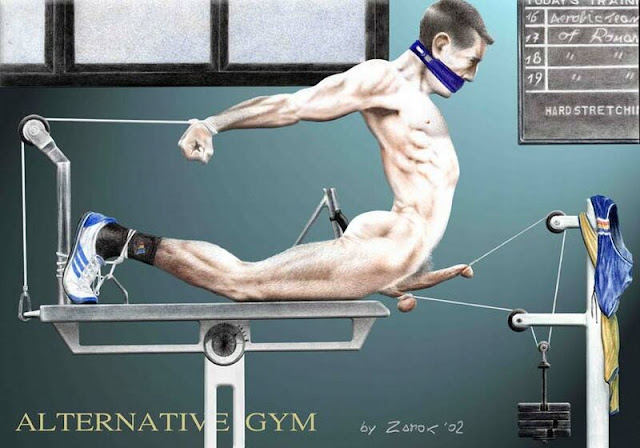 2
Zamok is probably best known for his 'Alternative Gym' pictures in which athletes are given workouts on complex bondage machines, like this daunting stretching device. It's a vehicle for a spectacular body pose but despite the explicit sexual ingredients Zamok's image is oddly desexualised. He does not indulge in over-sized organs, in fact the normality of his subjects in this respect is slightly disturbing.

A detail of this image which particularly appeals to me is the athlete's vest and shorts which are casually draped over the weight suspension post almost as though this were an interruption to a normal workout. The stretching device with it's table and pulleys seems to combine elements of medical equipment with conventional gym training machines. Even the gag looks like it might be genuine sporting paraphernalia and Zamok leaves you in no doubt that it's tight. The whole image is a study in tension. Coloured pictures by Zamok are rare. 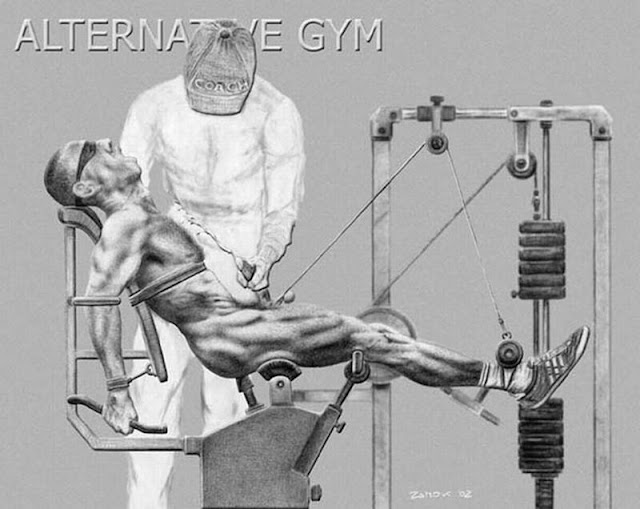 It is highly appropriate that my review of Zamok's work should follow hot on the heels of my recent re-appraisal of Franco's lab rat and milking machine art. This image is very much in that vein with the 'jock' in the chair being milked by his coach but Zamok reverses the role of machine and man. The captive is forced to work the machine (to alleviate the pull of it's weights) instead of it working him as Franco would have it. Zamok's machinery detail is also more convincing mechanically, although (as in the previous image) the anal ingredient is slightly vague, presumably it's action is linked to that hydraulic leg support. You need to an engineering mindset to to fully comprehend Zamok's wicked genius!

Notice that the coach who is administering the 'coup de grace' is only vaguely defined, it looks like Zamok toyed with making him undressed but in the end opted for a less involved, sketchy anonymity. As an authority figure he's distinctly underwhelming, more like a janitor who's wandered in to tidy up (so to speak). This is quite different to Franco's 'supervisors' who are usually characterised in great detail to create a contrasting impression of power, ugliness or malign intent and who revel in their subject's discomfort. Usually, Zamok's athletes are left to deal with the machines entirely on their own, although clearly someone else must have been involved in putting them in that position. Zamok does not tease us with those possibilities, inviting us to focus on the man's predicament instead – restrained, under physical stress and sexually exercised.

4
This is a great picture, albeit one that is slightly puzzling. Technically skilled, it captures a strange sense of shared purpose between the two protagonists which is fascinating. The eroticism is quite mild and seems to originate from the well-used, slightly sleazy clothing as much as the explicit sexual bondage.

This is the only Zamok image I know of where the 'tormentor' is present and depicted in equal detail with his victim. It differs from Zamok's usual style in other ways too. There's no machine involved, so there's a direct connection between the two men, literally - it's the cords attached to the weight and the captive's sex organs. But they are not looking at each other, communicating emotion of any sort, but simply looking down presumably contemplating what will happen when the weight is released. The mood seems quite calm and matter of fact, as though this procedure is not particularly out of the ordinary. The victim in his ritual restraints seems to submit dutifully, if not willingly necessarily.

This scene could easily be an exploration or a trial of strength, but if it is a punishment there's no sense of glee or distress or of the confused emotions that characterise Franco's work. It's perhaps worth bearing this sense of detached observation in mind when viewing Zamok's other, more spectacular images as well. 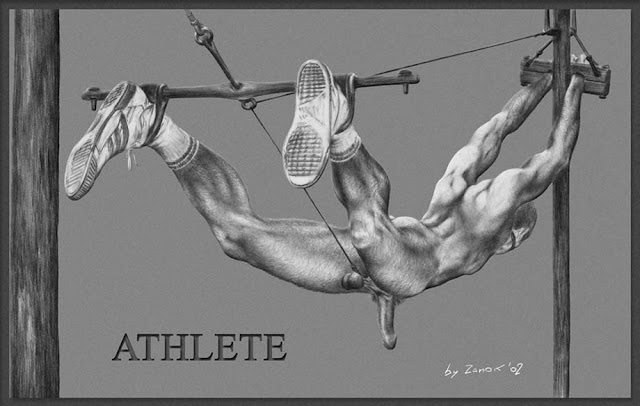 In an earlier picture, Zamok featured a goalkeeper hanging like this from the goal cross-bar. As is usual for him that picture showed his captive in profile and this variation is an ambitious departure with challenging perspective. It's such a striking image that it's not surprising that Ulf also produced a similar picture - 'Time Out', dated in the following year. It's not exactly the same, but the similarities are so striking that it's obvious they have been inspired by the same source. 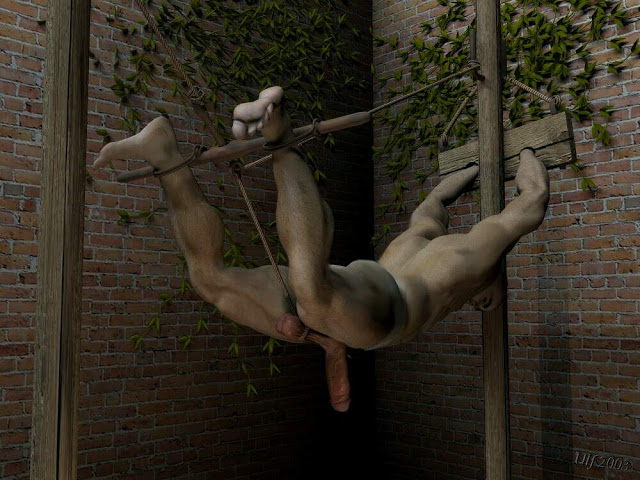 There's nothing wrong with artists taking inspiration from each other, Tom of Finland's work has inspired numerous images over the years. But it's interesting to compare how the two men have tackled the idea. Zamok seems to have contented himself with depicting the predicament in it's barest form but Ulf has embellished it with colour and sensual tones and a richly detailed background suggesting the corner of a back yard. The plant trailing down the wall seems to imply that this is a neglected area and the prisoners detention might be lengthy,
(see also my Ulf Retrospective for 2003).

In fact the original inspiration for both images is, I believe, an S&M, dungeon photograph which I thought I had in my archives but sadly have been unable to find for this article. It's the sort of scene that might have come out of a Zeus video. 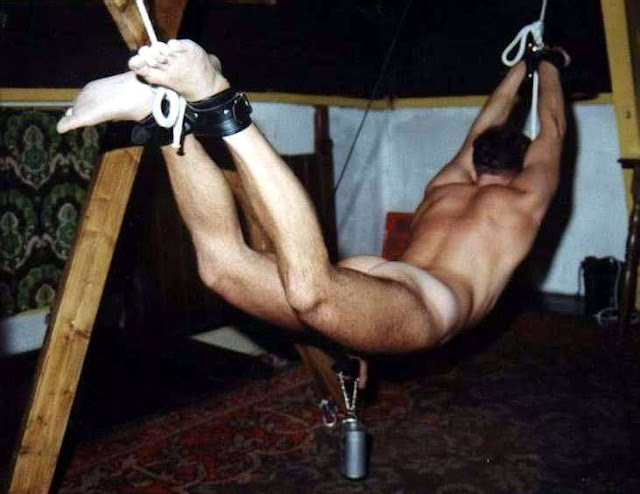 As a stop gap, I did manage to turn up this similar item of a western tourist detained for fun in a Middle Eastern carpet emporium which I thought was worth sharing. How times change.

For more articles in this series click on the A-Z label below or search for specific artists using the index page or search boxes (in the navigation banner and top right)
Posted by Mitchell at 09:16

To the excellent explanations of this two-part article I would like to add an observation, or a suspicion 🤔, that came to me, when I looked closely at the faces of the young athletes. Could it be that some (maybe almost all?) of the athletes shown, are not punished or tortured at all, as one might think at first glance 👁, but that they voluntarily undergo the treatment? I have the impression, that on some of the drawings we see excerpts from an obscure, unknown training program to improve performance. In my opinion, this is recognizable, among other things, by the partially chosen designation "Alternative Gym" 🏋️‍♂️, as well as the fact, that the sportswear was properly hung in picture #2 and a training plan is visible on the wall. But back to the aforementioned faces of the athletes. Concentrated tension, a will to persevere and a hint of understandable pain can be read in these. On the other hand, torment, fear 😱 or suffering are mostly not found. With regard to the theory of a training program presented, a picture by the artist Milkcow should be recalled, in which two gymnasts are forcibly milked 💧 by their trainer, because they apparently have not performed the desired performance. In this case it is uncertain, whether this will actually be done to increase performance. However, this is also to be assumed there. Many people undergo the strangest behavior and exercise programs, perhaps including the athletes in the drawings of Zamok. 👟