Arguably I'm breaking my no-CGI rule with this artist, but Y is short of talent and these images are well-worthy of inclusion with the artist's innate abilities shining through the computer's glossy veneer. This image captures brilliantly the squirming of the captive as he braces himself against the various external assaults on his body and his own internal orgasm (dramatically manifesting itself in the foreground). There are some great details, like the menacing curve of the dildo, the strap squeezing his body in tight, the creases and depression in the pillow as his head pushes back into it and not least the rolling back of his penis hole as the probe enters into it. For that I can forgive the lurking alien. I'm afraid the character names in these images mean nothing to me but I imagine they bring extra dimensions in, for those better versed than I in such matters.


This picture has similar characteristics but the artist's skill in depicting the tension of the captive's body infuses it with energy, bringing to life the jaded 'legs open' tentacle cliche. He's made strenuous efforts to depict aggressive 'invasion' here, not just with the radiating spray of ejected juices but also the more subtle bending of the cock under pressure - a fiendish torture in it's own right and one I can't recall having seen in a picture before.

This is a great idea but a scene that's hard to exploit fully due to the most promising area being out of sight. In our house putting the roll of paper that way round would attract even worse retribution! Despite the comic jokiness, the pants round the ankles position is a great suggester of vulnerability, simultaneously uncovering and hobbling the wearer. And who hasn't imagined creatures lurking just round the bend? In addition, for the Japanese, the octopus/squid is a classic symbol of erotic desire, memorably conjured up in Hokusai's image "The Dream of the Fisherman's Wife" (below). I'm not sure I can see how that fits into this scenario though! 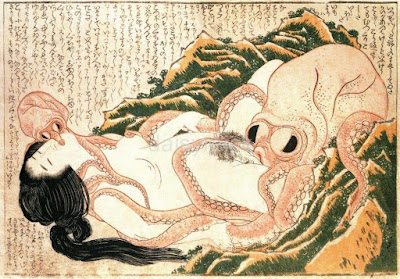 See also Naomichi, Logan, Priapus of Milet and With No Title
for some modern gay takes on this idea.
For encounters with other creatures click on the labels below
I am taking the name of this artist from Olaf who posts at GMBA google group, what he puts on his drawings is quite different, as you can see. If anyone can clarify I'd be glad to hear from them.

For more articles in this series click on the A-Z label below or search for specific artists using the index page or search boxes (top right)
Posted by Mitchell at 09:58