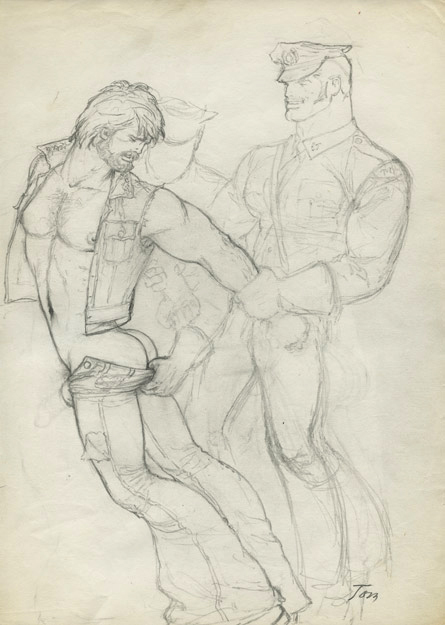 This article originated when I was (nerdily) trying to assign a date to this Tom of Finland image in my collection. It has a rather nice cop domination flavour with a tough looking, bearded guy on the receiving end. 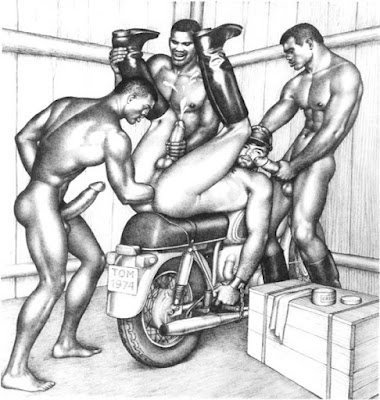 However, when I investigated further I found to my surprise that beards were not common in Tom's art generally. I only managed to find 18 instances amongst a couple of thousand of pictures.
But where they do appear these characters do seem to play significant roles. 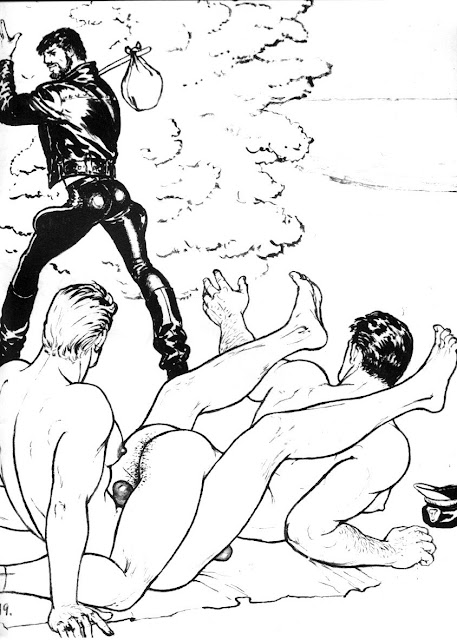 3
The earliest manifestation of beards seems to be in Kake No 2 (1968) where Kake seduces a boy on the beach. A bearded tramp-like character with an exceedingly hairy torso appears, watches their fun and then makes off wearing Kake's leathers (above). This theft leads to Kake's arrest by the Police, a severe thrashing and a spell in clink.

(Note: In compiling my count of beards in Tom's pictures, I have counted the multi-frame appearances in these Kake stories as 1 per book, not 1 per picture, counting them separately would double the total approximately but not affect very much the proportion of beards in the whole of Tom's work).
. 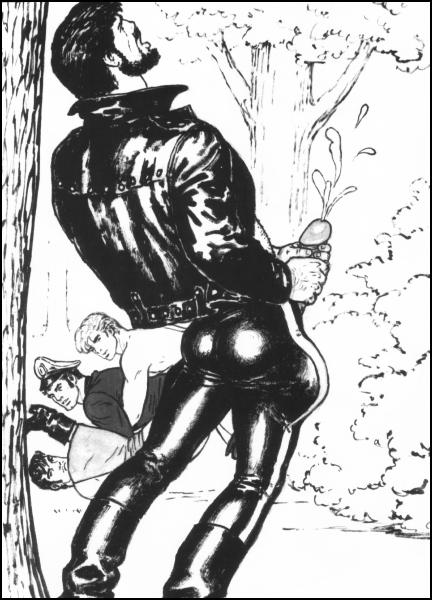 The same man reappears in the closing scenes of Kake No 4, up to his voyeurism tricks again.
But this time Kake spots him and recognises his stolen leathers. 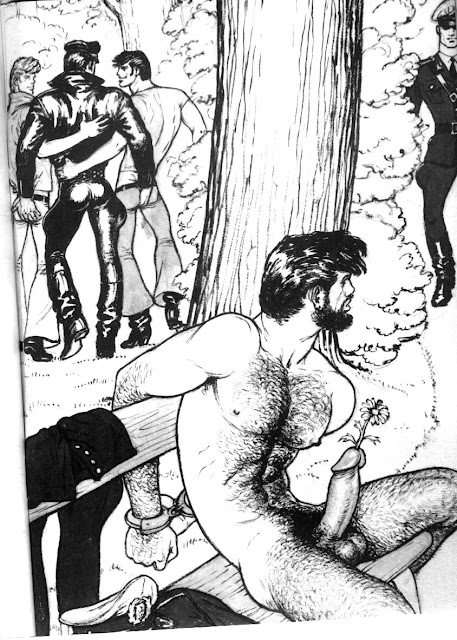 In Kake No 5, the villain gets caught and is given a painful come-uppance and general seeing-to by Kake and the lads. At the end they leave him to the tender mercies of the police, having 'fitted him up' for the theft of Kake's police uniform.

(This uniform was actually 'borrowed' by Kake in No 3 as part of a 'Tale of Two Cities' style exchange of places in jail with a sympathetic Policeman).

The bearded man plays a key role in this sequence of stories but his characterisation, though very strong, is much less generous than that of the jolly fistee of the 1974 picture and this piqued my interest to investigate further. 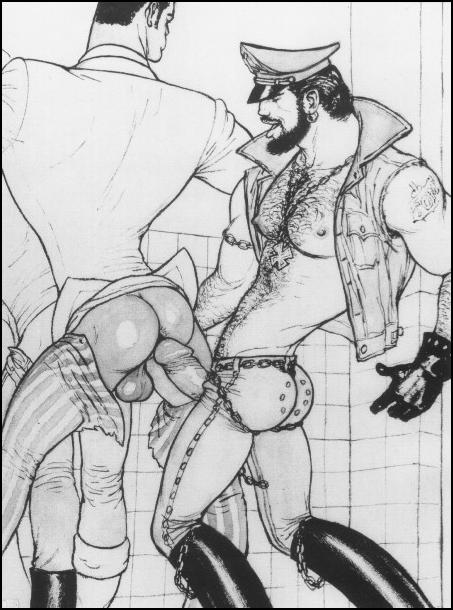 The next beard occurence is also in Kake, in story No 7 (1971) which depicts the progressive growth of a daisy chain orgy in a public toilet. This bearded man is the last to arrive. He's dressed as a Hell's Angel and makes an emphatic, dramatic entrance which is in stark contrast to the mild-mannered, well-dressed participants who preceded him. In those days a Hell's Angel was regarded as the embodiment of anarchic violence and villainy and even through modern eyes he's still emanating dark, raunchy sex, come to take charge. Tom seems to use his beard and hairy body here to underline this rebellious different-ness. Disappointingly, all he actually does is take his place at the end of the line, showing similar opportunist traits to incarnation number 1.
~
This image could be the clue to the date of my original mystery image (top) where the bearded man wears a similar studded, denim top with cut-off sleeves. The 1971 date of the Kake story also chimes perfectly with his fashion flares.

For other Tom of Finland material click on the label below or consult my Index of Tom Articles
Posted by Mitchell at 12:32