Ulf’s output was just as prolific in 2006 as in 2005. My collection of his images from this year, purely compiled from examples which have come my way, runs to 150 pictures.
1 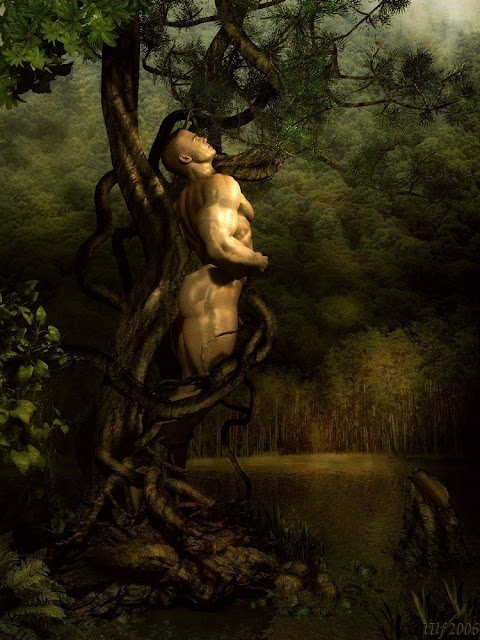 Ulf - (title not known)
A goodly proportion of these works are his continued explorations of fantastical worlds with naked men marooned on islands or wandering through bizarre landscapes and magical woods where be-winged creatures (male fairies?) wistfully pine amongst over-sized mushrooms. These works are imaginative and artfully crafted suggesting man being at one with nature but they are also often imbued with a sense of loneliness and isolation. In this example the interaction with the landscape seems to become disturbingly physical while the gloomy half-light seems to be the harbinger of a mighty storm. 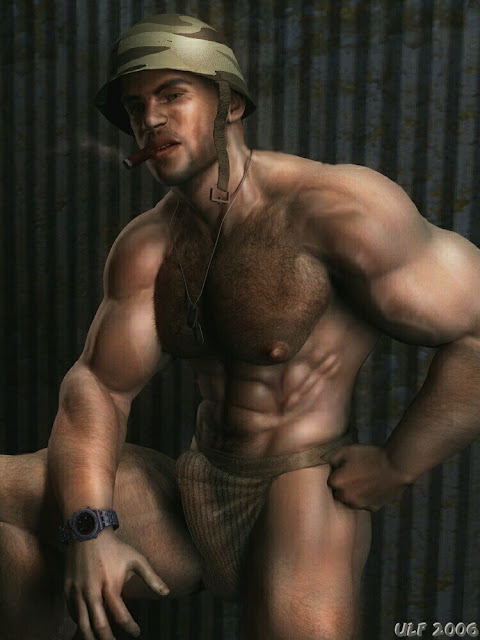 Ulf - Get your ass over here

In any year Ulf is much preoccupied with portrayals of men as idealised, strong and sexual creatures, but it’s usually in pin-up style, admiring from a distance. This portrait of a GI however has a more intimate quality. Ulf’s world does not consist of universal prettiness but this man’s mature face is full of character and lends his muscular, hairy body a sort of unthreatening softness and welcoming warmth that makes the peremptory instruction of the title seem quite playful. The anatomy is exaggerated but in a controlled way and the rendering of the jockstrap is very convincing. 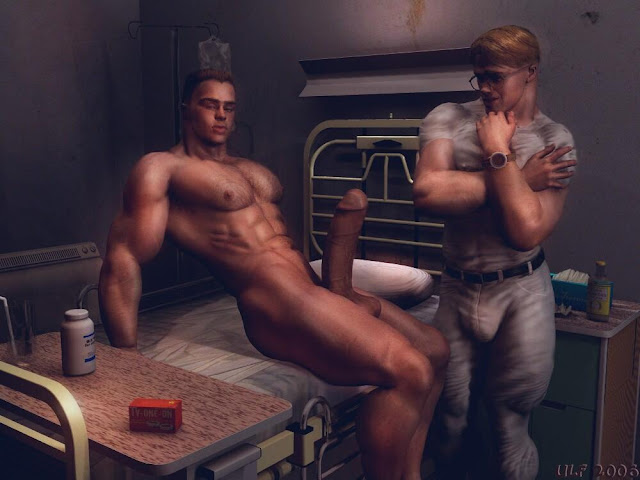 Speaking of exaggeration, gargantuan cocks were a favourite device of Tom of Finland and he liked to show them attracting a crowd of youthful admirers. Ulf’s take on the same idea causes mystification and rather unprofessional embarrassment. But how cool is the patient here? He looks out to us with smug satisfaction rather than the anxiety you might expect from the title, as though confident that this organ is going to be a passport to success in life.

The product on the table in the foreground seems to challenge the medic to take the problem in hand. I’m not familiar with the packaging but I imagine it’s a recognisable product to Americans and I’d be interested to know the connection Ulf seems to be making here.

There are some curious swirls and stripes in the sheets and the medic’s clothing, it seems to be an experiment in depicting creases and you’ll see it in other images included here too. There’s some nice shadowing on the medic’s shoulders but his trousers are less successful, turning into a bit of a spray-on job below the knee. 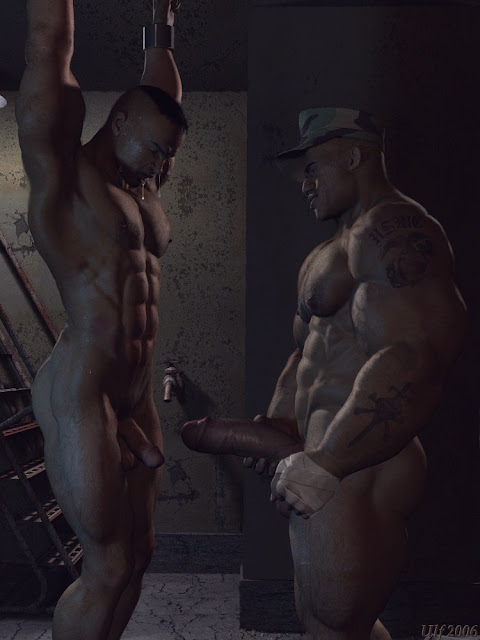 This is one of Ulf’s best known images from 2006 and you can see why it gets reproduced a lot. Here we have a cute, young soldier at the mercy of one of his NCO’s, a man who is older and bigger but not particularly attractive. The title seems to imply a sort of initiation-cum-brat-taming going on and the soldier’s hand wrapping suggests violence might even be involved. You also sense his oversize cock is demanding more than simple admiration this time. It’s not quite clear whether the liquid dripping from the captive’s face is fearful sweat, spit or something else.

In this picture Ulf seems to capture the sense of unchallengable institutional power that we saw in the “Guys in Uniform” series I revisited recently. Oddly enough when Ulf produced his own direct adaptation of a GIU image (also in this year) he seemed to dispense with this subtlety, substituting brute force. 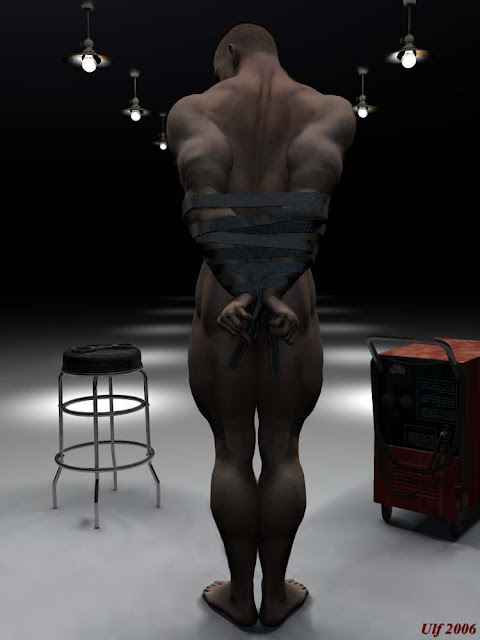 Ulf - I'll be right with you
There’s normally a ‘predicament’ scene in Ulf’s work and this one has a satisfying subtlety and simplicity. In a vast, bare and very clinical room, the bound captive stands to attention before a stool with handcuffs lying on the seat on the one side and, on the other, a red box that we recognise from other pictures as a portable electrical power device. It’s as though he’s being presented with a choice and there’s a nice symmetry in the scene and a precariousness about his pose that seems to underline his dilemma. Although the victim is only restrained by the arms it seems like there’s no place for him to go in this empty space. Alone with the instruments of torment he can only contemplate how terrible the coming trial is to be. 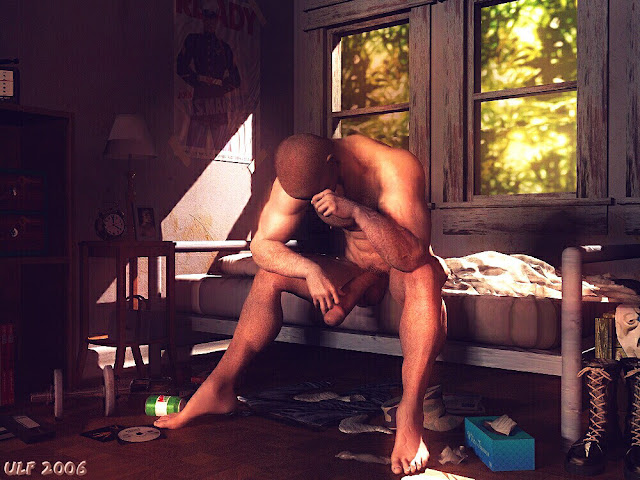 Ulf - Morning Wood #3
There’s sensitivity of a different kind in ‘Morning Wood’ which is another exploration of the sequenced picture story format by this artist. This set is more narrowly focussed than ‘Dangerous Marine’ and ‘Buddy System’, simply following a young marine waking up and then going to the toilet to empty his bladder and beat off. This is almost Turner Prize territory in its sparseness of content but the opening images like this one are beautifully observed and depicted sensitively and romantically. That atmosphere evaporates when the marine enters the bathroom which is cold and crude. The final images are bleakly functional, almost ugly. This transition from dreamy sentimentality to the banal is insightful in some ways, but something of an anti-climax visually. 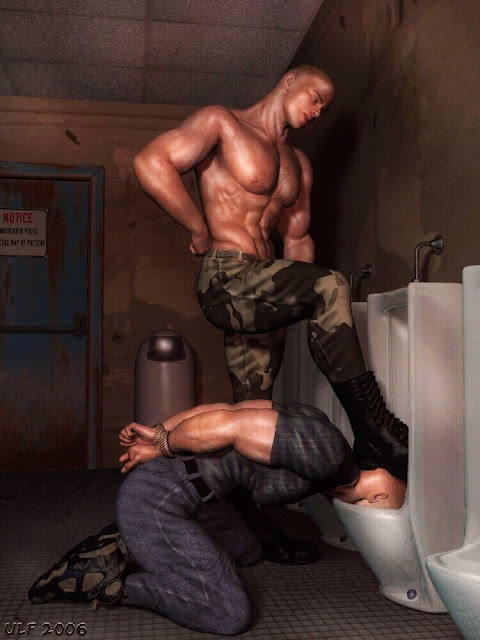 Ulf - Clean it good, there's more
Ulf did not neglect his political interests in 2006 either. This rather forceful humiliation acquires a different dimension when you read the notice on the toilet door. The victim remains dressed in his spiv-like, best clubbing clothes (disguise?) and this desexualises his participation making his cleaning chore seem all the more distasteful. The man dominating him is portrayed with a heroically muscular torso and a determined face, totally in control. His camouflage gear belongs to a gay stereotype of a more hardened kind than policemen expect to deal with. This image warms the cockles. 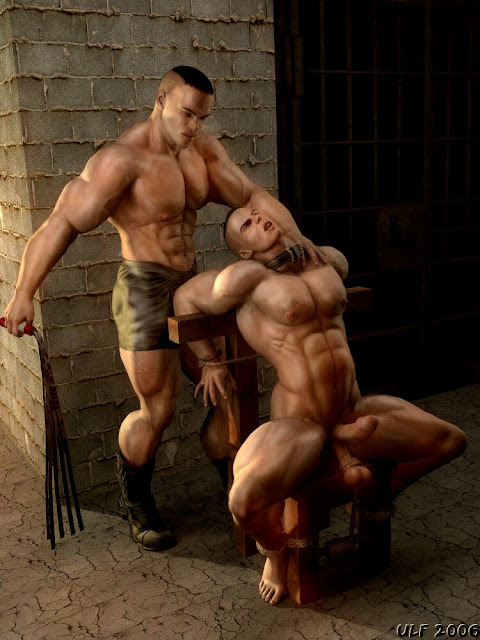 Ulf - Only I can help you
This is one of my personal favourites. The stressed restraint position of the (noticeably younger) captive is erotically well-tuned and leaves him sitting uncomfortably and exposed for punishment from a fearsome looking lash. His erection gives us permission to enjoy his plight and it’s relatively normal proportions confer a frisson of realism. The title of this piece is somewhat puzzling, it sounds like the mind games of an interrogator in the movies, impressing on his captive the advisability of spilling the beans before he is passed on to someone much nastier. In contrast the visual image seems to be more of a dungeon roleplay aimed at bringing about a spillage of a different sort. 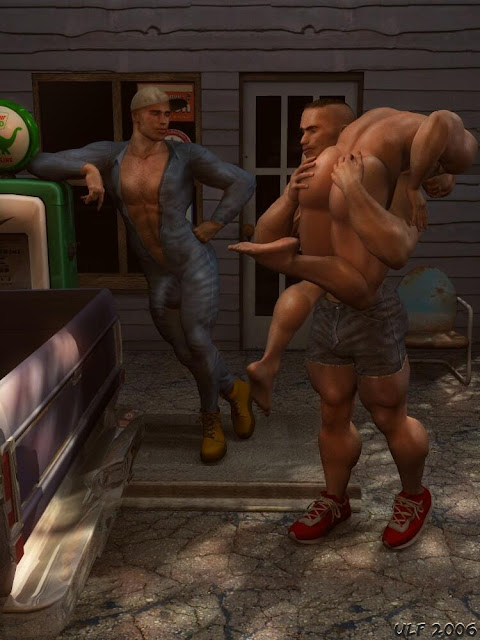 This idea harks back to the 2005 “Can I Keep Him?” image and there are others in 2006 where a particularly succulent man is carried off, destined for a protracted period of compulsory service for the amusement of his collector. Drawn purely from the imagination, Ulf has managed to inject a tingling element of unreformed redneck into the kidnapper. However the petrol pump attendant with his slinky, sprayed-on overalls, open to the waist and failing to conceal a huge dick is an extraordinary, gender-blurring contrast. It’s as though it’s his job to stand there enticing passing motorists into investigating the latrines where the local ‘boys’ await. Now he leans seductively on his pump watching the abduction with complete unconcern as though it’s regular occurrence in this neck of the woods.

This idea of owning another man (as implied by the title of the piece) is probably the opposite of what most gay men want and belongs to the darkest areas of fetish. However we all have our fantasies over objects of desire beyond our reach and Ulf’s playful realisation of the idea in ‘boy’s games’ terms must have wide appeal 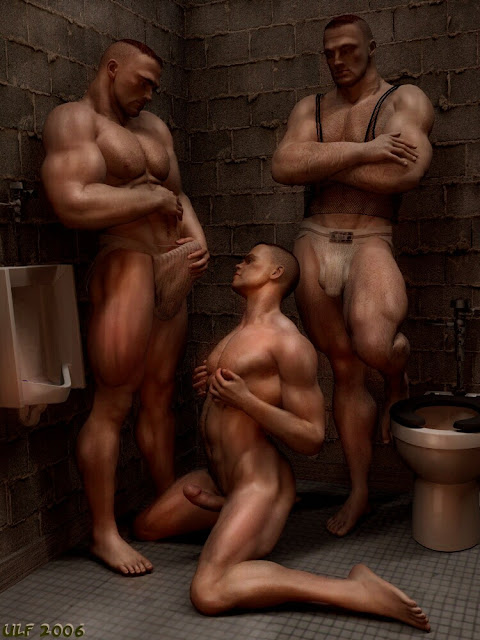 Ulf - Take a whiff
I couldn’t claim this article to be a representative sample of Ulf’s 2006 work without including an image simply depicting the enjoyment of sex. Older men teaching the youngsters a thing or two seems to be the standout theme of this year’s pictures and you can see the similarity of the well-used jockstrap on the left to that worn by the mature GI in picture 2 above. Compare the realistic way it is drawn with the one on the right. The artist’s style evolving.

This typically sleazy setting could easily be what’s at the rear of the filling station in the previous picture so watch out young man! However despite the folded arms there’s nothing sinister going on here just the physical attractions of maturity being recognised for a change and these two can hardly believe their luck.