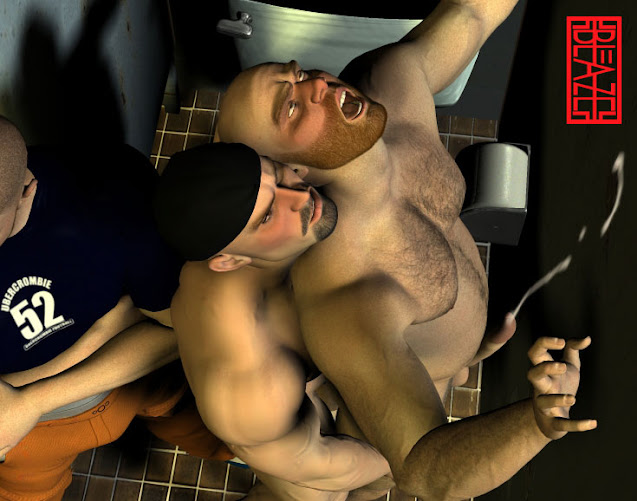 Any prisoner fortunate enough to have a safe cell to himself, or to share it with an undemanding cell-mate, is nevertheless still liable to assault in shared, secluded areas of the prison, like the communal toilets - as shown in the previous post and in the Blue Blazes picture above. This fate is particularly likely if the unfortunate inmate has offended those who rule the roost in these parts. The artist authentically includes an accomplice carrying out the necessary role of keeping a look-out for the guards, although he seems to have quite sensibly posted himself in a position where he can see all the action as well 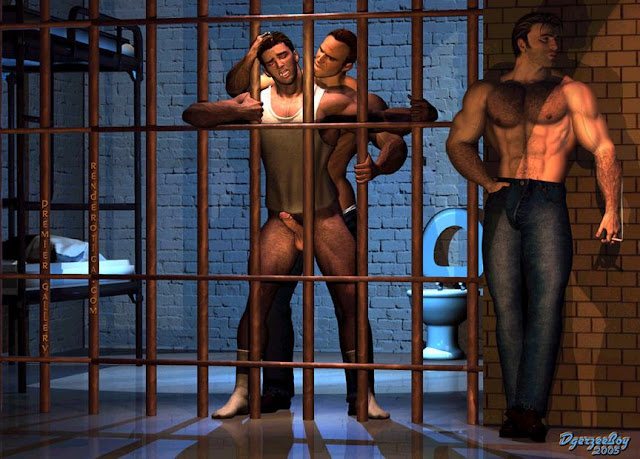 DgerzeeBoy's lookout takes his responsibilities more seriously but still manages to look cool. One would imagine this hunk must be popular with the other inmates, who wants to share his cell? At the other end of the scale, the emotion of the poor convict getting a ragging is depicted in equally impressive manner. This is one of my favourite artists, he does terrific faces.
archive of DgerzeeBoy art
(he doesn't seem to be on Renderosity or Renderotica anymore) 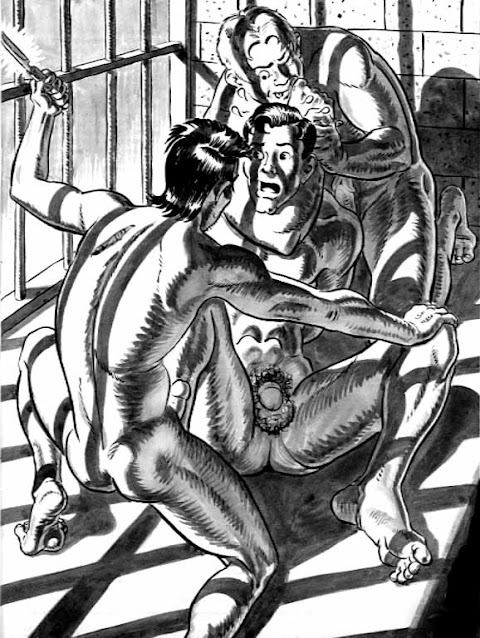 Arguably the most scary prison attack of all the samples featured in this series. The prison bars rule out any chance of escape and the semi-cartoon-y faces do little to dispel the threatened horror. We are left to conjecture about motives but prison etiquette is complex and non-intuitive, easy to breach. The captive's well-coiffured hair and soft facial features might suggest just such naivety. But he's also a rather succulent, unusual tit-bit as jail-bait goes. There's a disguised clue to this more mundane explanation just over the captive's shoulder (see also 'hidden erotica' label).

Rader employs an interesting variety of styles in his work, this has a mid-20th century, boy's comic book look that seems to have rather innocent connections for this subject matter. 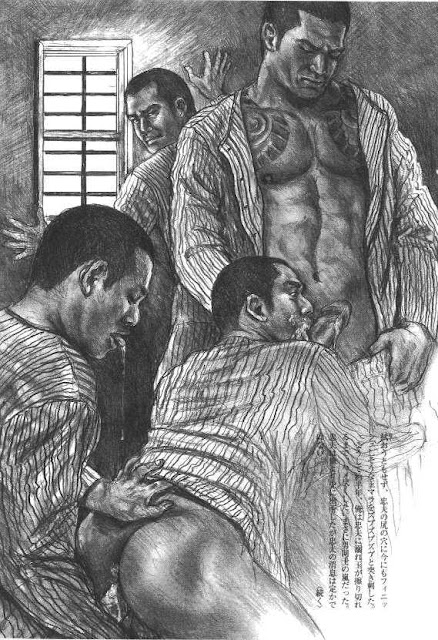 Ryuji brings out the clandestine nature of these encounters even more powerfully. He shows the tight uniformity which is normally imposed on prisoners but is not very evident in the other images in this series. This element of men under discipline creates an entirely different atmosphere of camaraderie and shared experience. The lookout's hankering for a piece of the action illustrates this, there's no obvious suggestion of coercion here  - unless the Japanese script supplies it.

see My A-Z article on Matsugoroh 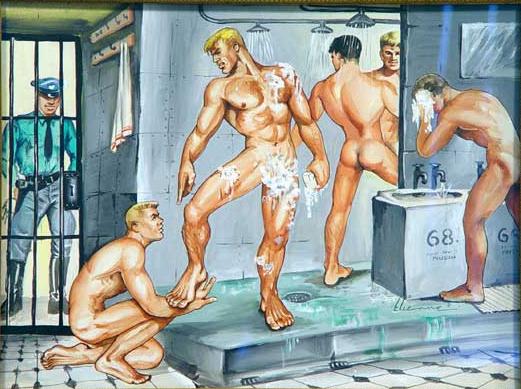 In sharp contrast to the intense, aggressive encounters depicted by other artists, Etienne's take on prison power is much less physical, more psychological and rather satisfying. This bully is almost aristocratic in his dominance and while the young puppy is humiliated, the other inmates carry on washing as though nothing is happening. It looks like the warden is going to be no help to him either. The natty tiling on the floor is an unexpected 'home from home' luxury for a prison, only a gay man could have drawn this! Etienne's crazy perspectives are down to this being a wall mural.

(My A-Z article on Etienne) 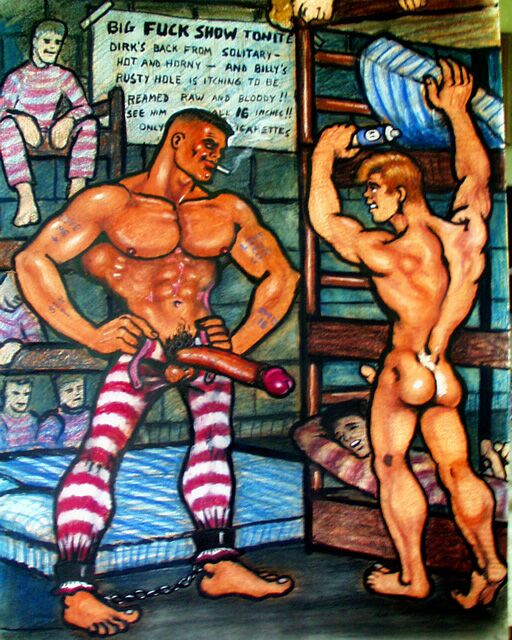 Link - Out of Solitary

And now for something completely different by the late and rather wonderful artist, 'Link'.
There's clearly an established pecking order in this prison but no-one seems to mind as the alpha male is welcomed back from a spell in solitary by his dick-starved cell-mates. He seems entirely unabashed or chastened by his punishment which has probably enhanced his credentials in the eyes of his fellow convicts.

Link's hooped, chain-gang, prison garb and communal cells belong to a completely different age to our other exhibitors. They are more like Summer Camp dormitories and POW detention centres. His are places where a civilised gay culture prevails among the inmates. He populates them with lush muscularity and sensually slim young men ready and able to make the most of their judicial sentences.

My A-Z article on Link

In this series I have focused on the view of jail as an inescapable, dangerous place where fear reigns and sexual predators and dominant bullies do as they please, sometimes for quite inexplicable reasons. Some would see this as a microcosm (albeit exaggerated) of the real world and converting it to sexual fantasy - in all it's violent horror in some cases - is a classic psychological trick for coping with unpleasant reality and fears.

There are whole host of other images where the exploitation and abuse is inflicted not by fellow prisoners but by the Prison Guards themselves, the uniformed figures of state authority. This is a very different psychological scenario and I suspect appeals to a different psyche. It's a topic for a future article perhaps.

The Link example with which I closed above belongs to a third and entirely more optimistic group, where prison is seen as a place of opportunity, where men can pass their time of incarceration enjoying each other as a respite from (and in defiance of) the boredom and inconveniences of enforced discipline and institutional restraint. Some gay men have always lived this way - despite the considerable dangers sometimes.

Three different gay world views but in reality these are 3 slices cut from the same loaf of life, just buttered differently according to taste and situation.

Read this series from the start
Posted by Mitchell at 10:11