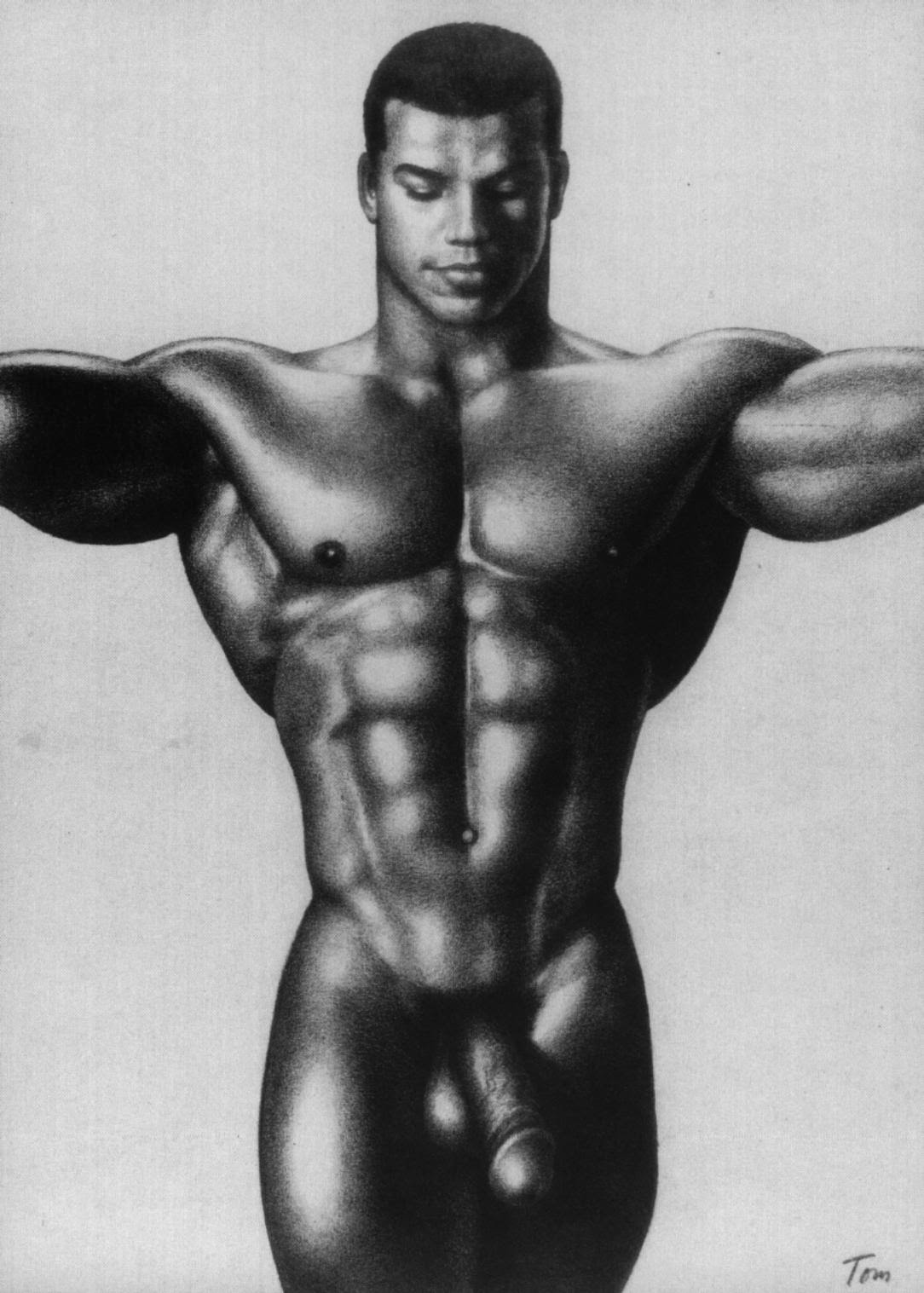 Tom - Black Model (1972)
In the 18 years from 1967 to 1984 Tom only produced occasional pictures with black characters. It was during these years that he was busy producing the Kake booklets of course and the more substantial 'Pekka' series but as we have noticed, black characters are equally scarce in these. His 'non-storybook' black drawings in this entire period amount to less in total than the number he had produced just in the 5 preceding years. Many of them are portraits or else have a rather serious 'arty' feel about them, like the striking image above from 1972 and at the other end of the 70's (for example) there's a picture loosely based on Leonardo's 'Vitruvian Man' but with a kneeling black guy mischievously at work at the rear of the arms-spread poser.
.
The image here shows a beautiful young man but with it's hint of a crucifixion seems a touch political (and typically provocative). The face in this image has that infusion of the young Muhammed Ali which I mentioned in the last article and interestingly this picture comes shortly after Ali's return to boxing and the public stage after winning his long and bruising battle with the US Government over serving in the Vietnam War, but I can't substantiate any connection between the two.
. 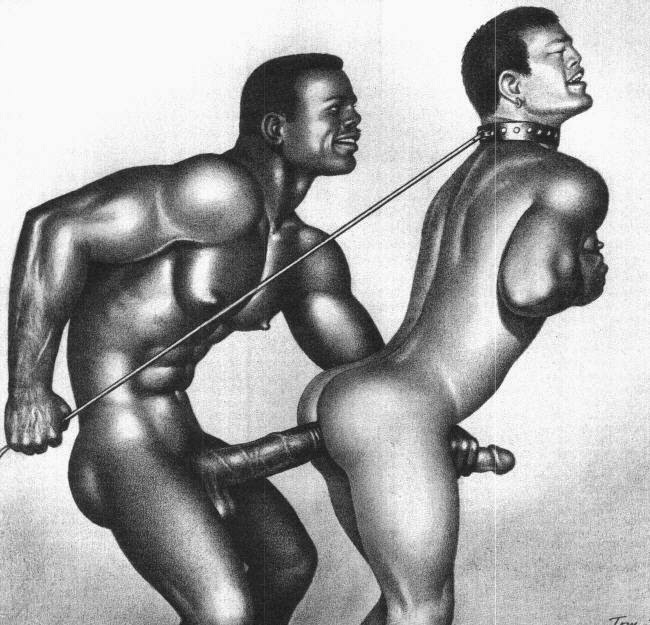 Tom - Poked (1978)
This image from 1978 is one of the few explicit and fetishistic works in this period. During this time Tom blurs the differences between black and white - with blandness of features in his serious pieces (see previous example) and with exaggeration of lips and jaws in his caricaturing style. In this picture he has drifted back into stereotypical representation of his black character (note their relative cock sizes!) but this is a long way from the story-telling rough and tumble of the 60's.
.
There's a distinct touch of malicious pleasure in the power-play here but I'd hesitate to ascribe any political meaning to it. However, the character under the collar is most intriguing, his face is quite unlike any of Tom's other creations which makes one wonder if it's meant to be a real person and if so is this a particular revenge fantasy or just about being dominated? 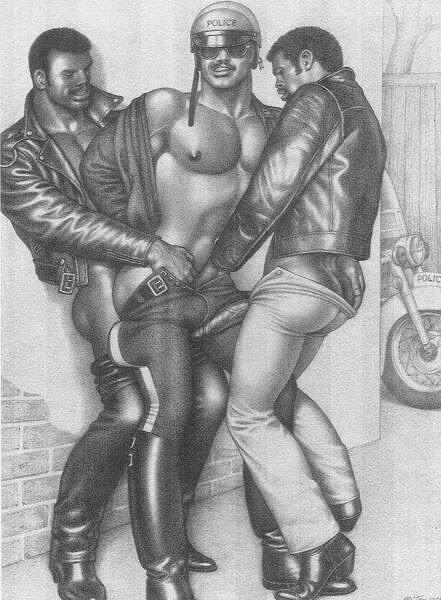 From 1985 to his last pictures in 1990, Tom seems to rediscover black men. Half of his entire 'black collection' comes in this short period. This is no doubt a consequence of his visits to the USA starting in 1978 when he would have met real blacks in a gay environment. However, something else must have triggered the sudden intense interest that appears in 1985.
.
A couple of portraits from this period point towards personal acquaintances, but the evidence is there to see anyway in the way he depicts black men - even in his trademark cartoon style pictures. With small subtle changes they suddenly become more differentiated and authentically black in appearance, a process you can almost see happening between the faces in this picture. We can also see the discovery of reciprocal interest, seemingly registered with surprise on the sandwiched cop's face. A number of other pictures in this period show the white cop pursued by black admirers. Perhaps this is Tom's wishful thinking.
. 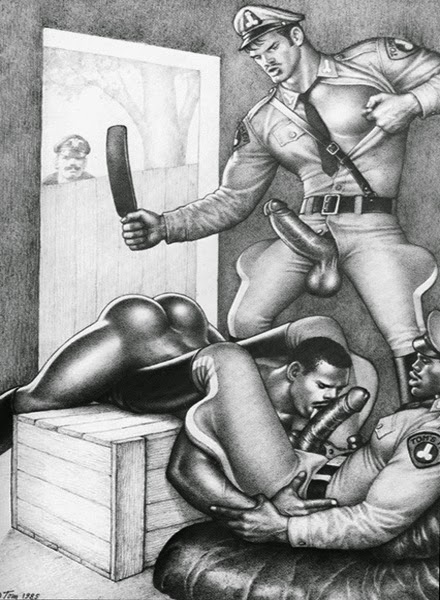 Making this true connection with black men seems to free Tom to involve them in his pictures in a way he didn't really do before. This image epitomises that breakthrough with black and white in uniform together, both working over their black ''prisoner'. I believe it's Tom's only black-on-black scene and it completely casts off the political shackles of race and history.
.
The white cop is something of a triumph too, a sort of muscular, rejuvenated Kake who has somehow usurped the threatening cop figure of earlier times, here wielding his paddle with unashamed lust.
.
There's a nostalgic look back at the motifs of earlier years in these final pictures, the fence and the figure peeping over it are an example, we can only imagine what significance this had for Tom to use it so often.
. 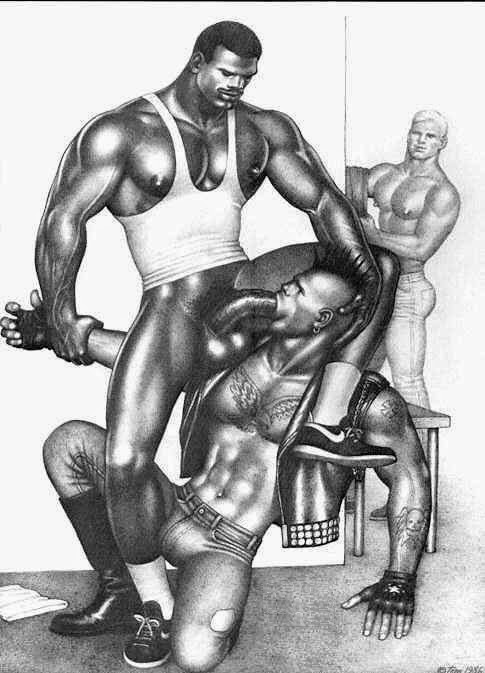 There's a supreme sense of triumph in this picture from 1986 but for once there's no cop or Kake figure to steal the limelight. Tom started drawing Punks in his last years, doubtless another reflection of his discoveries in America, and he seems to have assigned them the character of non-conforming, mischievous goblins, so this one's appearance in a locker room scene immediately suggests that old favourite scenario 'the thief'. He might equally be a peeping Tom, but his tightly-zipped jeans suggest a non-sexual reason for his presence. In Europe, punks have a reputation for fascist sympathies and the arm tattoos on this man seem to bear that out, making the 'forfeit' here all the more unpleasant for him and deliciously satisfying for us.
.
The promotion of a black athlete to do the honours here, restoring order, seems enormously significant in another way too, because this forced-sucking, domination pose is one of Tom's most cherished and most repeated scenarios. It's a direct descendent of the 'Careless Motorcyclist' picture with which I began this series of articles and a situation repeated in the 'Careless Sailor', 'The Intruder' and the 'Careless Postman'.
. 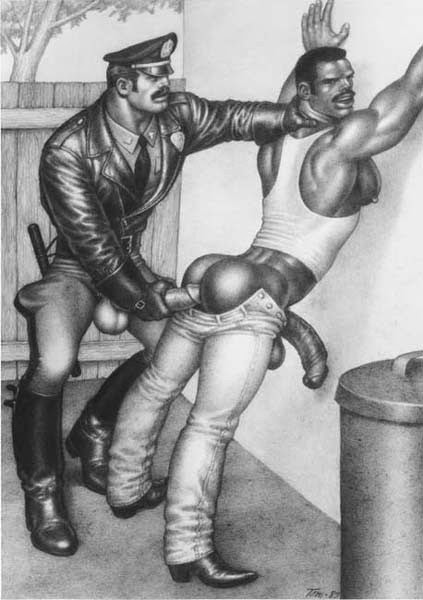 Tom - Hands Against The Wall

This is one of Tom's last pictures and though not his best, it is in some ways a final act of integration with the black man assuming the role once taken by Kake. Forced against the wall, he becomes the random victim of a lust-filled cop abusing his power. An unreconstructed Tom has not bothered with any ambiguity about the level of coercion nor the victim's willingness. However, the style of the drawing and the familiarity to us of the location (recognise the fence?) tell us that this is fantasy and not political.
Or is it?

In these final images Tom's view of black men reaches maturity, they have clear, separate, adult identity which is not just a modified white man. They participate in the sexual rituals of Tom's Land not simply as equals but as fully fledged men in all their complexity, lustful and lusted after, sometimes submissive, sometimes dominant, both loving and beloved. Tom's work, as always, reflects the world around him and he evolves along with it.

For other artists in the A-Z series click on the label below or search by name.

His black guys always looked like Billy Dee Williams to me. -Joe T.

My original link to Muhammed Ali was based on a boxing image Tom did where the resemblance is so striking
that it's surely not a coincidence. However there's enough variation to allow comparisons with many other black men. For me, the fact that they do look like real black men shows that Tom's interest was genuine.

I'm sure it was genuine interest on his part, too. But, aside from the Ali exception, they usually did look like Billy Dee Williams to me. Which adds up, since I found a lot of his faces to look lke Clark Gable, and Williams looked like a black Gable.

Fair enough, the Clark Gable angle hadn't occurred to me before. Thanks for the comment