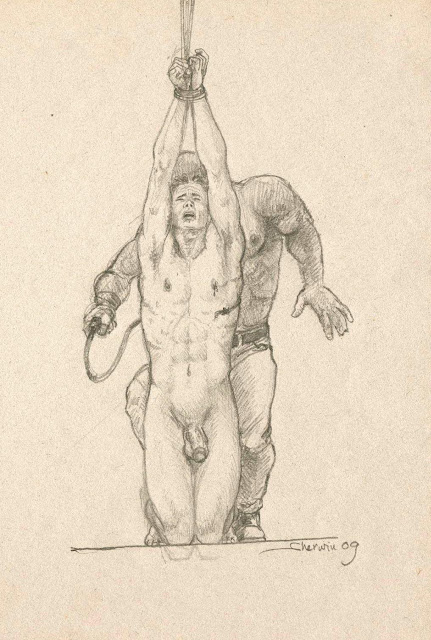 Sherwin – Whipping
Sherwin's art is less well-known than it deserves, his pencil drawings, almost academic in style, are easily overlooked in this age of HD colour and his subject matter is not for everyone either, ranging from simple bondage through painful punishments and torments to mutilation and grisly death scenes. This whipping sketch is a simple example of his style, it's one of his more animated scenes and the partly hidden, muscular perpertrator is an intimidating prescence. The anguish of the victim and his youthful, trim appearance earn our sympathy and desire. His submissive, kneeling posture looks like an afterthought, but it works well.
. 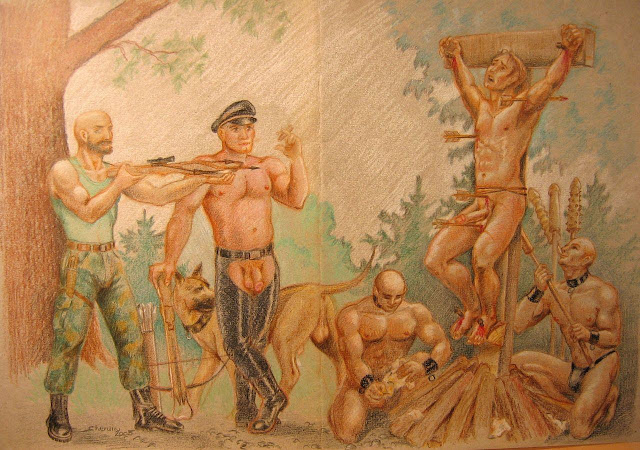 There is a noticeable influence from classical religious art in Sherwin's work. In this sweeping tableau, it's not just the martyrdom subject matter that is straight out of the middle ages, but also the deliberate, spread out posing of the characters and the woodland landscape behind them. Paradoxically, he probably pays less attention to the sensual allure of skin tones and scanty clothing than his supposedly pious predecessors did. A leather fetish crowd have been parachuted into this decidedly 'off-piste' action, complete with absurdly oversized toys. It's all completely surreal. Is this a gay 'wild bunch' with an interest in historic re-enactment? Or are they considerately obliging a novice's off-the-wall fantasies? (there's certainly evidence he's enjoying it!) Or is Sherwin just humourously acknowledging his influences? Note the combination of three, different, antique punishments here. You will find many other historic techniques in Sherwin's work, either mythical in origin or borrowed from an age when Christians seemingly vied with each other in a search of uniquely agonising modes of death.
. 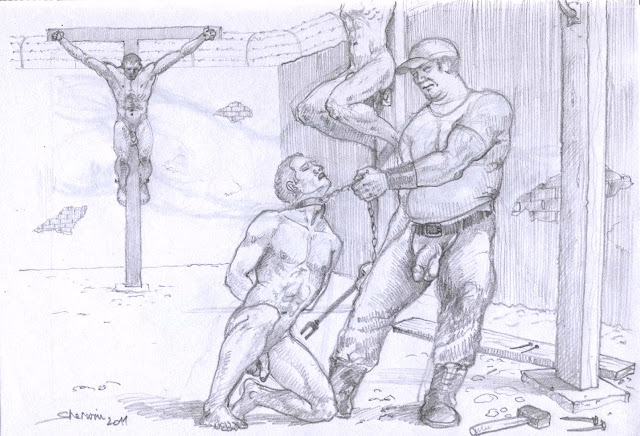 'End of Rebellion' transplants the triple crucifixion theme of the Easter story to a modern day prison yard, complete with sinister barbed wire fences topping the walls. The treatment of the victim on the important middle cross, presumably the leader of the rebellion, is intriguingly classical, aloof and almost majestic. In this picture the solitary torturer is more typical of Sherwin's work than the previous example, he's very non-scene and rather unpleasant. However, were it not for the victims' (barely noticeable) anal impalements and the incongruous exposure of the prison guard's (semi-flaccid) organ, this image would barely qualify as erotica. Sherwin juxtaposes motifs from the 'safe' S&M world (the slave collar, the prod and, of course, the dangling cock of a complete stranger) with some powerful, historic imagery connected with martyrdom, mass executions and extermination. The picture reads as an allegory of sexual oppression. But to me it also seems to suggest a relationship between S&M practices and the fear of persecution.
. 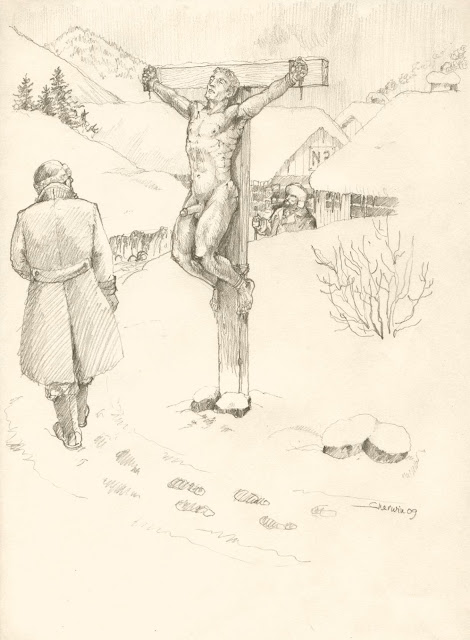 Sherwin – Winter Crucifixion
In the images we have seen, Sherwin does not do dramatic angles but views the action from the side, standing back and dispassionately recording the scene.'Winter crucifixion' is more 3-dimensional but has the same sense of detachment. There's little sense of emotion here. Just the seemingly callous disregard of the guard and the proud forbearance of the victim – another borrow from Medieval martyrdom art. This composition seems to pay homage to the great landscape paintings of Caspar David Friedrich, incorporating some of his memorable motifs, like the mountains, the way-side crucifix and the footsteps in the snow. However, whereas Friedrich sought to depict man's God-given place in a majestic and sometimes cruel Nature, Sherwin simply shows the brutality of human nature.
. 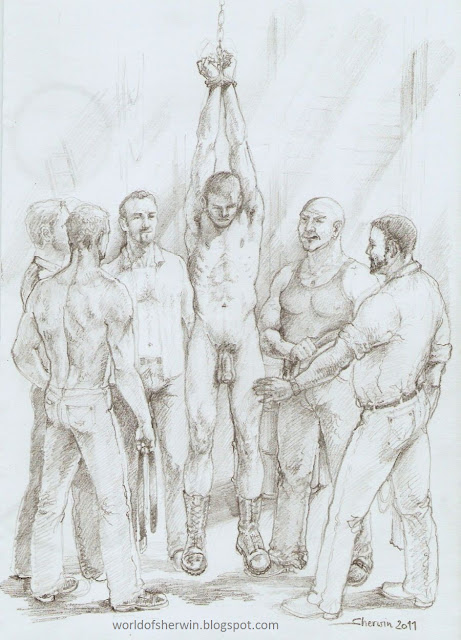 “Wish” is representative of a group of works by Sherwin depicting the fulfilment of a young man's secret desire to suffer torment at the hands of other men. "Tableau" (above) is arguably another example of this. Sherwin sagely warns that the consequences may be less pleasant than the fantasy. Thus this helpless victim dangles at the mercy of a group of men whose everyday clothes and neglected physiques make them seem like very ordinary citizens. They certainly don't fit the cosy blueprint of S&M, with it's in-built ethics of consensual play, safewords and respect of limits. Consequently their interest in the helpless victim is not just of the ordinary but sinister, as though they too are harbouring secret desires. Desires that are apparently exemplified by the rough-edged ringleader, eager to exploit this opportunity. Tom of Finland depicts 'coming out' as a joyful release of inhibitions, this sombre reading of a world full of danger couldn't be more different.
. 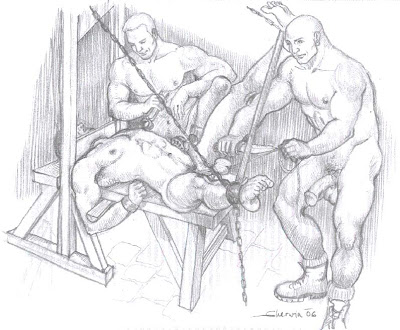 I wanted to include a sample of the artist's more discomforting works, which form a significant part of his output. This one is less explicit than some, the unpleasantness is imminent, but mostly only threatened, although that doesn't make it any less disturbing. The arousal of the victim suggests consensus and the modern day time-frame (pin-pointed by the boots of the naked henchmen) slightly defuses the scene, suggesting it's an elaborate S&M episode rather than a serious assault.
Or is it? Is this another case of 'be careful what you wish for”?
.
Leaving aside these chilling thoughts, the restraint of the victim and his helplessness, is beautifully captured. His pain is expressed, in typically economical style, by the arched back and single clenched foot. Sherwin's tour of antique here tortures traverses the Inquisition and French Revolution with some wacky improvisations, which for most of us would not instill much confidence about the mental stability of his torturers!
.
Images like this will challenge the consciences of many fetish fans – is this where our desires lead us? It will repel others. But remember this is not commercially motivated art, designed to simply shock and thrill. It's an expression of deep feelings which must be acknowledged before the work can be understood. Is this image about cruelty? Or suffering?
Whose cruelty? Whose suffering?
The answer lies within yourself.
. 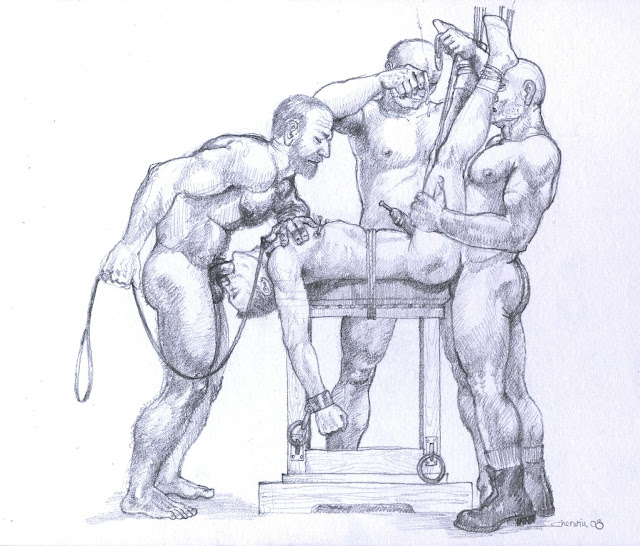 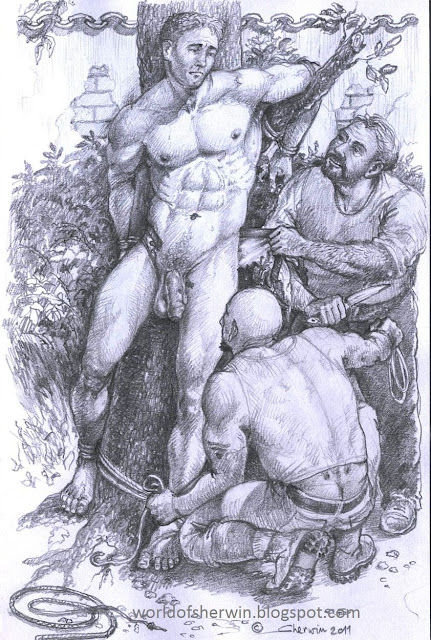 Sherwin – Stripped
I couldn't resist including this picture. It's particularly well drawn and detailed and full of classical art allusions. The lop-sided restraint method is used in a number of traditional renderings of the St Sebastian story (including Goya for example). This suggests what might be coming next for those who recognise the pose. The victim's glumly resigned face, almost pitying his attackers is equally saintly, although he has a chunkier, 'Greek statue' physique than is the norm for Saints. His assailants may be in complete control of him, but they still find themselves having to look up to him as they go about their evil work. The harder, stronger-looking one is even kneeling, a typical foot of the cross pose, as though defering to the superiority of his captive. Sherwin's updating of a very traditional, compositional arrangement to create a modern, homo-erotic fable reveals to us it's ancient, subtle power. In a way, the grotesquely smiling knifeman, who leers while cutting away his victim's underwear, is more scary in a modern context than he would have been in less healthy, bygone ages. Even if all the art ancestory and religious symbolism completely passes you by, the dramatic effect is timeless. The other fascinating thing about this picture is that Sherwin passes up a fairly obvious opportunity to sexually connect the participants, suggesting he's trying to convey a rather more important message.

*****
Sherwin's art is intelligent and seems full of very personal psychology. Despite the brutality of some of his work there's more sense of dignified suffering, pain and sorrow rather than cruel anger. It appears to be strongly influenced at several levels by a deeply religious, cultural background which I couldn't hope to understand properly. The sadism he depicts seems to be luking in the real world to catch the unwary. Which I suppose is a true masochism.

Sherwin has a blog and his work also can be found in the archives of GMBA (current link in sidebar) and at MCR. There's also a decent archive at Sean the Artist.

To see other articles in the A-Z series click on the A-Z label below
Posted by Mitchell at 09:07