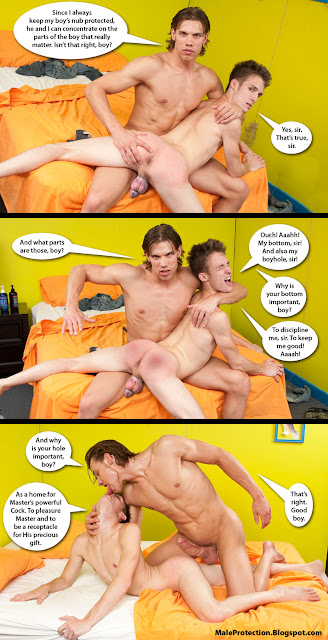 For my money the imposed power of the lock-up is a more interesting expression of domination than the demanding of grovelling subservience. The 'yes Sir, yes Master' routine has always seemed a bit theatrical to me. It tends to emasculate and diminish the victim, which seems self-defeating in the context of lusting after a another male. Better to dominate a man than a mouse!

For this reason I'd prefer the so-called 'boy' to be less spindly and more manly. Chirenon does feature older men in his work too but I couldn't pass over that delectable rear or the supple backward arch in the last picture, which by the way is a rather beautiful composition. The Yin-Yang  curves of the two men's bodies are reversed and echoed in the conjunction of the penis and buttock. This generates such an emphatic sense of them coming together, that it doesn't seem to matter that we don't actually see it happening. We can well imagine it.

Story courtesy of Male Protection blogspot
(superceded by a tumblr one now, search for 'Chirenon')
Posted by Mitchell at 17:47

I enjoyed seeing the boy getting his nice arse very red.