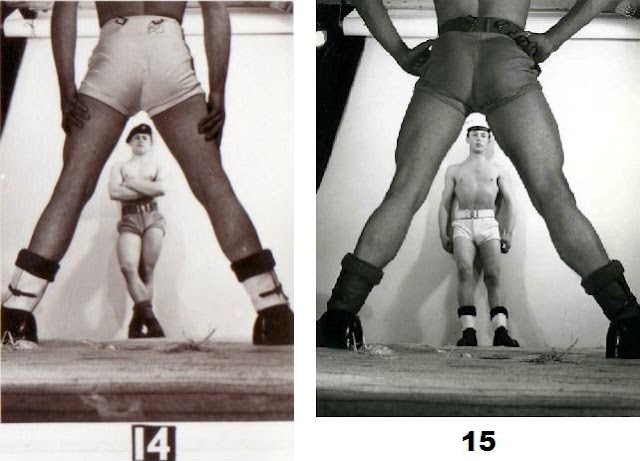 I have expressed before my admiration for pictures 14 and 15 which show the two models shot from between the other's legs. The sailor has now ditched the full length trousers for white shorts which suit him admirably, this is a feast of chunky legs! The low viewpoint enhances this no end of course and the boys have hitched up their hemlines for good measure. The headgear also works well in this image.

The soldier's pose in these pictures is quite aggressive, arms folded or hands on hips (in 15), spoilt only by the slight inward bowing of his legs. The sailor by comparison seems wary, almost fearful - very sexy. The wall shadows, framing the far figure add drama and menace to the scene as well.

By the time you've got this far, the shape of the beret on Fred's head (left) becomes almost indecent! You can read equally suggestive meanings into the horizontal lines of the sailors cap and his chunky build compared to Fred's more slender outline. I've no idea whether the photographer worked all this out, how much was intuitive, how much accidental, but I think it gives an understanding of how these photographs worked on their audience who were not distracted as we are by the barrage of internet imagery and had time to study the pictures and fantasise.

This is why they still have the power to intrigue us today, if we take the time to look.

There's a better copy of picture 15 in an earlier article in this thread.
For earlier articles in this series click on the GIU/Royale label below
If anyone has better copies of these pictures which they are willing to share I would be very pleased to hear from them
Posted by Mitchell at 08:22