Oda Toshimi is one of those artists known for a particular striking image, or in his case a set of images, depicting the punishment of a captured Japanese soldier during the Sino-Japanese war. The captive is subjected to a variety of tortures while onlookers jeer and laugh. 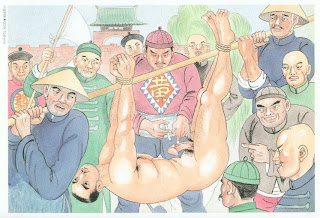 Oda - Captive slung on a pole

I picked this example, partly for the unusual cigarette torture, but also because of the depiction of captive transportation. There is something highly erotic about a tied man being carried off from the scene of his capture to another place where he can expect to be abused. The usual technique is for the hunky captor to sling his acquisition over his shoulder, caveman style. This method, suspended from a pole carried between two men, is favoured for a heavy or struggling victim and is much beloved of Tarzan scenarios, but otherwise quite unusual. It suggests the victim is prized and/or dangerous, (if not necessarily destined for the stewpot!)

The naked captive is muscular and handsome, but leaving aside the generous erection which he maintains thoughout his ordeal, the youthful, innocent way he is depicted makes him seem almost like a martyr in the context of the drawing. His tormentors include women and all their faces are caricatured in a Hogarthian way to show their hatred of the captive and amusement over his fate. However, they are all fully dressed in heavy clothes and there is not the slightest hint of sexuality in the way they are depicted, despite being engaged in genital tortures. Their interest in the victim is limited to jeering his erection and punishing it.

It almost lends a flavour of historical realism to the picture with a political jab at the barbarian Chinese thrown in for good measure. Perhaps it's only a sophisticated form of masochism where the victim is not even desired by his torturers. It has to be judged by the standards of it's era, which I am not qualified to do. Certainly the representation doesn't stand in the way of enjoyment for fetish enthusiasts.

A possible influence for this image is that of Paul Jacolette, who did a series of prints of Asian subjects (in color) in the early 20th century. His style also ahs tha 'flat' quality of Japanese woodblock prints.

The figures of Oda Toshimi appear similar to those drawn by Cavelo. In the drawings by both, the men being abused are noble, muscular and sexually aroused. The size and artistic detail of their erections create a powerful eroticism to each scene.