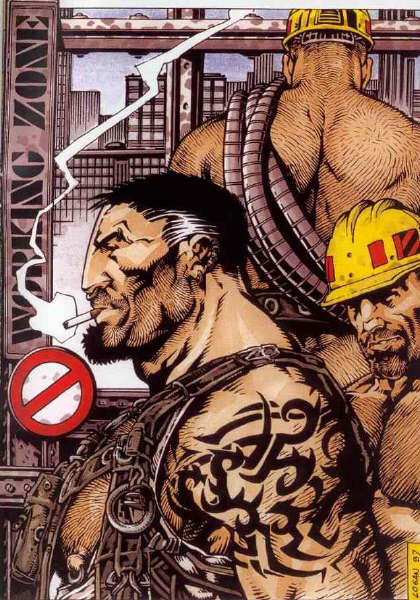 Logan's work is quite different from most fetish artists, his men are mature, big, hairy and not especially pretty but he draws out the sexuality of this hyper-masculinity rather well. The fetish angle is primarily bondage as an adjunct to raunchy, sometimes forceful, sex but you will also find S&M imagery. 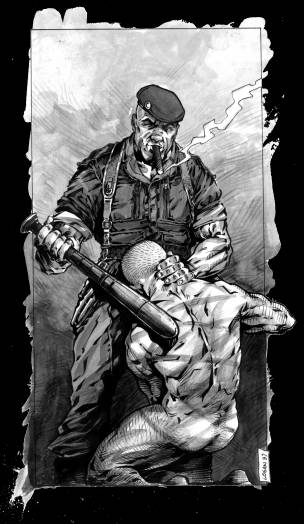 There is often a military or police presence in his work, these characters abuse men who fall into their hands, sexually or physically. In smoker, the satisfaction and intensity of the soldier's expression is chilling. The victim is utterly submissive, you can see that this is a strong man, muscular and hairy, who has been broken. In this picture Logan uses clothing and nudity to great dramatic effect. 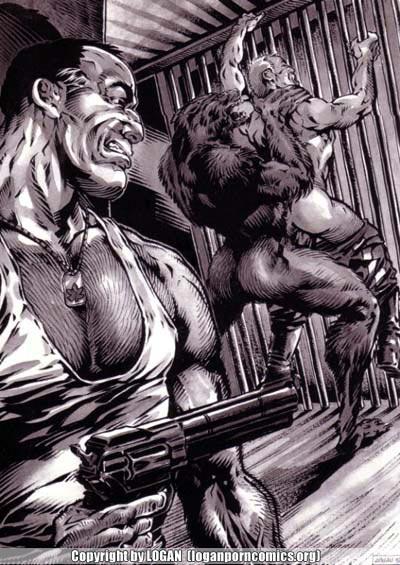 Logan has a highly professional, comic book style so there is often a tremendous sense of action and exertion in his best images. He makes great use of lighting, close-ups and unusual angles for added atmosphere as in werewolf above. His treatment of creases in garments and furrows in skin is quite emphatic, useful for emphasising detail in small scale comic images and it makes for characterful, hard faces, but creates an odd effect in bodies - see the back of the victim in 'smoker' 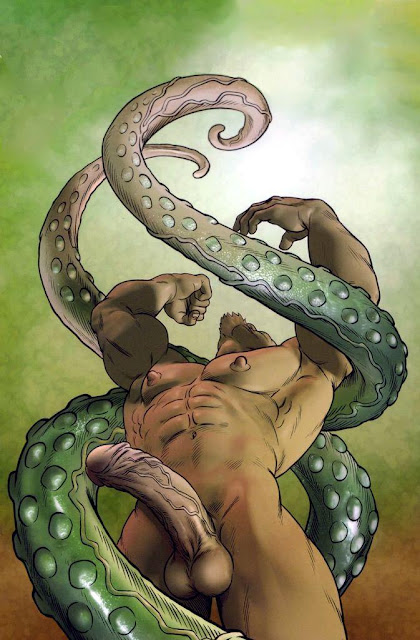 The werewolf picture is an example of Logan's fantastical work which also includes some highly erotic 'tentacle' imagery. The style here is softer but the more delicate shading brings out the latent strength in the thick arms of the octopus creature, giving this image a dangerous edge. Compare this with the snake picture in my A-Z article on Fillion. Logan is able to indulge his artistry in the sweep of the bodies and curling tentacles which make for an attractive image. This element of intelligent artistry can be seen in other pictures, in hard hats above, for example, the facial furrows echo the shape of the tribal tattoos.


Logan also uses his softer style for more humorous, romantic images,
often starring cute chubbies but these pictures are outside my remit here.

For other articles in this series click on the A-Z label below.
Posted by Mitchell at 09:56

I just came across your blog for the first time today, having been brought here by a comment on GMBA, and am finding it very interesting for the historical viewpoints it gives as well as for all the sexy men. You mention Blake as one of your artists in your A-Z. I've gone back a long way but can not seem to find my way back to 'B'. He is one of my favourite artists, and I would love it if you give me a link to examples of his work, either on your blog or elsewhere. Meanwhile, great work on this blog!

To find my article on Blake just type Blake into the search box in the header - it's still there!

Blake used to have a good exhibition on Martin of Holland's Ning Group. It is now deleted but he may know where to find Blake pictures.