I originally posted the artist under the name 'ie' but a reader has now identified him as Kobaro. I wanted to include him as an example of Japanese comic art which is firmly focussed on adult males. 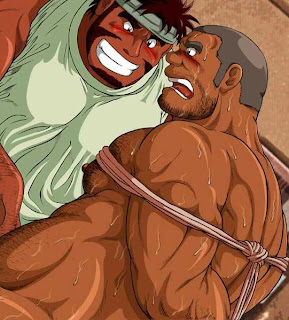 These pictures show men, often big men, captured and under threat. The drawing style has a sort of exaggerated, almost carved appearance which is very 3-dimensional. Interestingly, the bondage detail doesn't seem to capture this effect, there isn't a strong sense of tightness or indentation of the flesh. There is a sense of drama and emotion conveyed by facial expressions, flying perspiration and the close placing of the characters in relation to each other. Of course the eyes and bared teeth are stock stylisations anchoring the pictures in the comic realm but much of the drawing is more representational. 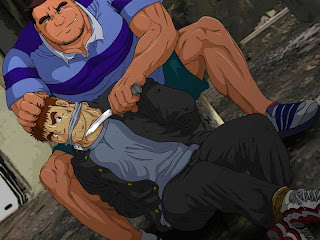 In the knife attack picture the attention to detail in the clothing is fascinating and you could not have a better example of clothes being used to add detail to characters and situations. In fact this picture is chillingly convincing if you study it. The captives over-large eyes are another example of exaggerated size conveying youthfulness and innocence but the craggy jaw and muscular neck affirm his adulthood so there is no ambiguity about age here.

I have no website information for this artist but a search on his name will turn up plenty of examples.


For earlier posts in this series click on the A-Z label below
Posted by Mitchell at 11:34

Beefy hairy naked hunks all bound and at the total mercy of their sadistic captors! Wow!

This artist's name is "Kobaro"
You can usually find a lot of artists by doing a "reverse Google image search" of the images you post and uploading one of the pictures.

Many thanks for the information!

do you know where can I find more of his artworks? I tried reverse image search and no result.

Just search using his name in Yahoo! with safe search off, but make sure the name is not 'helpfully altered' by the search engine, it tried to redirect me to Kobato(ugh!).