After the rich choice of artists for the letter ‘F’ the only names I have found for the letter G are: Garcia and Gicquel. There are some interesting artists working with computer generated images in the ‘G’s (Gorka, Gilgamesh, Greasetank) but sadly CGI doesn’t qualify under the criteria for this series.
.
Xavier Gicquel is a mainstream artist with a fascinating style. He uses strong lines to delineate the figures and their clothing and often uses a palette of rich bright colours. The backgrounds are equally strong and this, combined with the use of “naïve” perspective produces an ‘flat’ effect. The overall result is reminiscent of mediaeval stained glass windows and very attractive to view. The stylised trees in the example shown enhance this feeling even more.
. 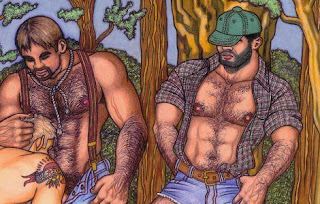 The naïve feel carries through into the depiction of the figures as well who are often slightly overweight with chubby, short legs and dressed in clumpy shoes or boots producing a bottom heavy effect. However the naivety stops at the waist, he does a nice line in hairy bodies and manly faces which always wins my approval.
. 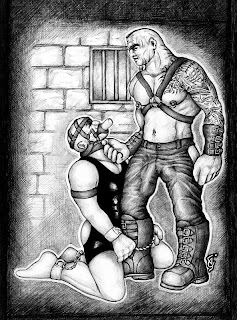 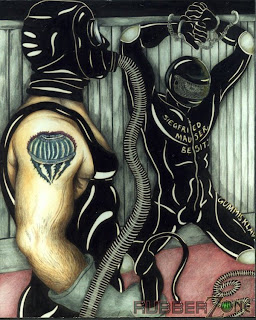