If you have been following my ‘sailor blogs’ you won’t need me to explain my fascination with these men, triggered by war movies in my formative years and the drawings of Tom of Finland. Sailors featured in my very earliest pictures and since I started showing my work on the web they have elbowed their way to the front in a couple of series:- ‘The Press Gang’ and ‘The Drunken Sailor’.

The Press Gang setting is in the British Royal Navy and the sailors here are agents of authority, acting under orders to abduct and subjugate a group of muscular builders so they can be forced to serve as seamen (72).
. 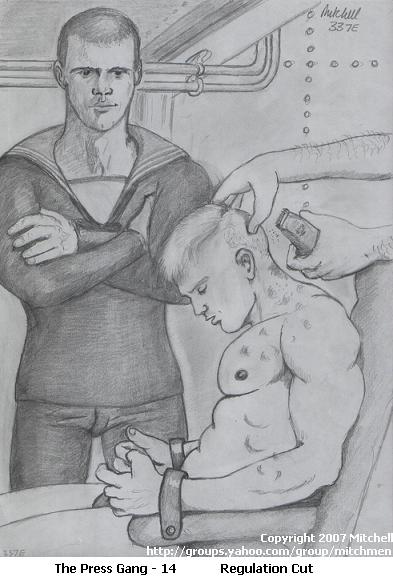 This picture gives a rare outing for forced haircut fetish. We all know how much gay men like short haircuts and shaving, but how rare it is to see these interests in picture form. There is also a shaving picture in the Drunken Sailor series (see next post).

The Sailor's role in the story was to represent the power of authority in uniform to dominate raw masculinity. The fact that the builders were mature men while the sailors were distinctly youthful gave a nice extra twist of humiliation to their plight.
Continued