In the Underworld, a raiding party has abducted a group of young men
from a local settlement, intending to sell them into slavery in the city.
Amongst them is Jake, an apprentice blacksmith, caught while making a delivery.
Forced to wear an iron collar and shackles, he trails the others disconsolately. 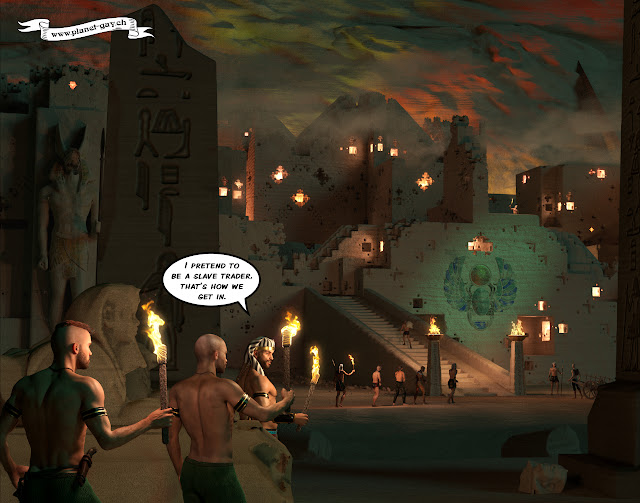 Unknown to Jake, some friends who witnessed his abduction
have followed the slavers, aiming to infiltrate the city and free him.
Luckily one of them knows a trick for getting past the guards. 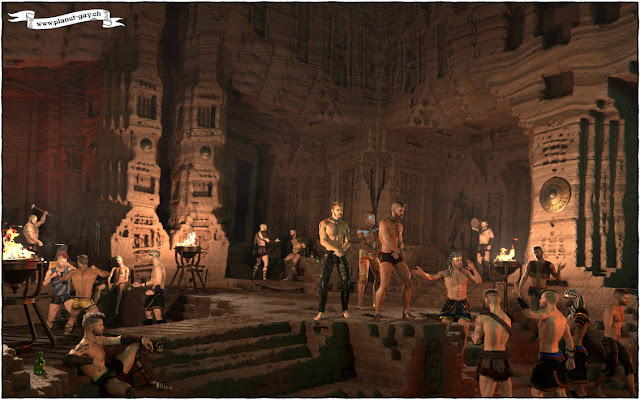 The three captives are offered up for sale in the bustling market hall.
Jake is brought to the front, the first to be sold
To the delight of the slavers, the King's representative is present
having heard good reports about the latest catch.
He scrutinises Jake closely as the auctioneer extols his virtues.
Bidding is lively 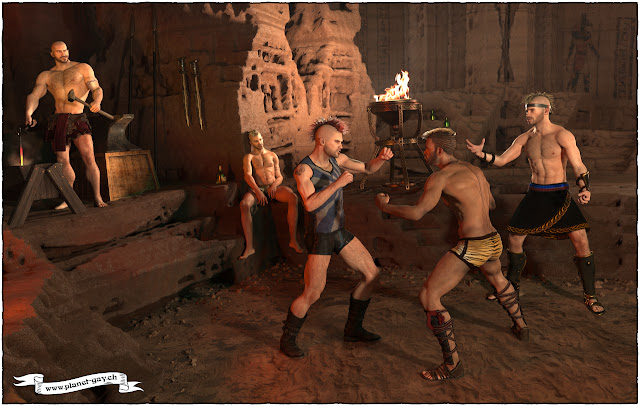 While the Auction proceeds, the vibrant life of the Market goes on around them.
Jake spots the blacksmith, his mentor, is there at the back and tries to catch his eye
But he seems more interested in watching two young men who are having a fight. 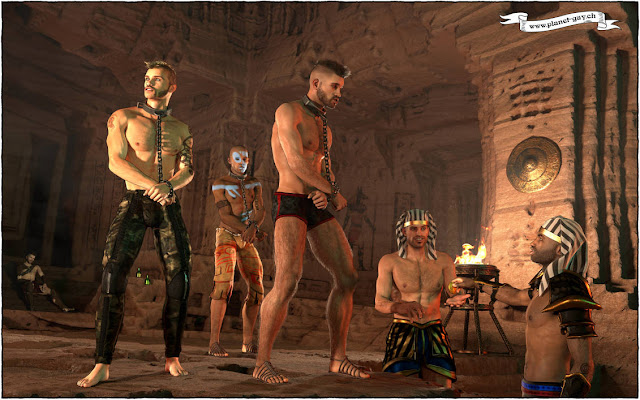 Naturally, no-one can outbid the King's man, Jake is sold.
As he hands over the money the purchaser eyes him greedily. 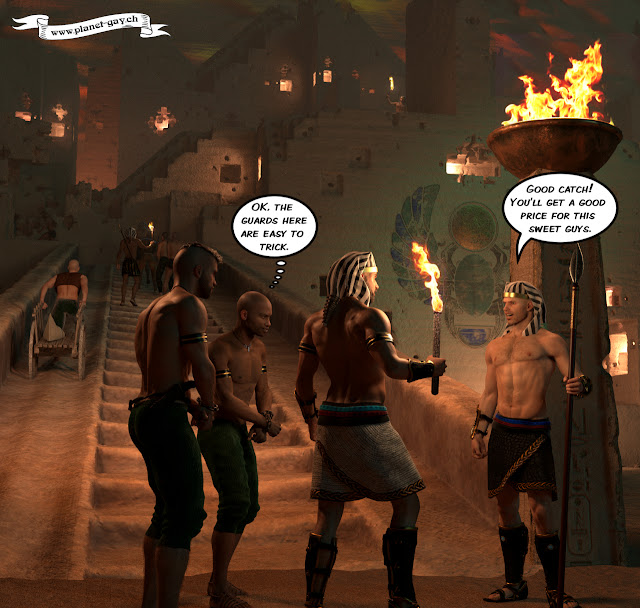 Jakes friends arrive just in time to see him being led away towards the citadel
Two have allowed themselves to be chained by their guide, pretending to be captives.
They don't realise that they have been tricked.
They too will take their place on the auction block. 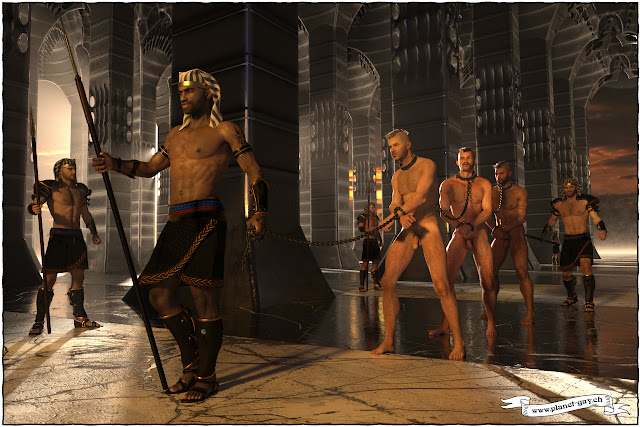 The grim reality of enslavement in this city has already engulfed Jake.
Stripped completely naked after the auction he is clapped in freshly made irons
and chained together with two other unfortunates who found favour .
They are led into an enormous, soaring hall under the lustful eyes of watchful guards. 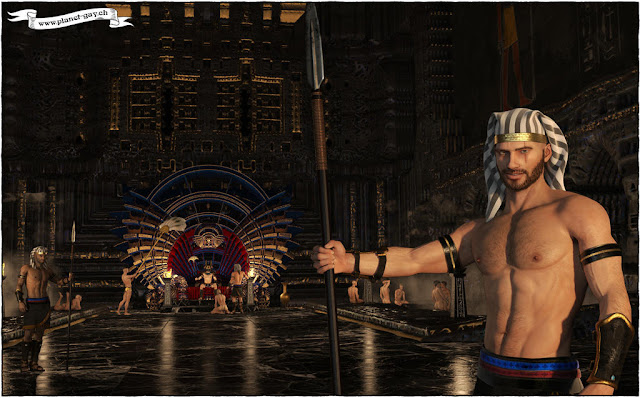 Jake suddenly realises that they are being taken into the presence of Anubis.
He is the Great Lord of the Underworld and pitiless judger of the dead.
Jake never believed he really existed until now.
But he is still alive, what can Anubis want with him? 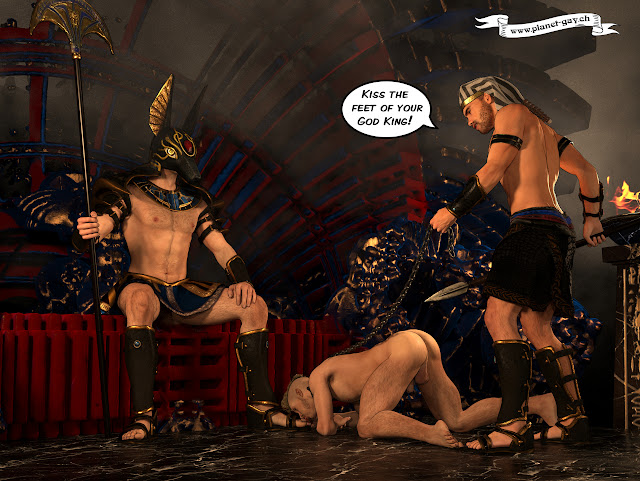 Ahead of them another young man has already been forced to grovel
before the jackal headed deity at the point of a spear. 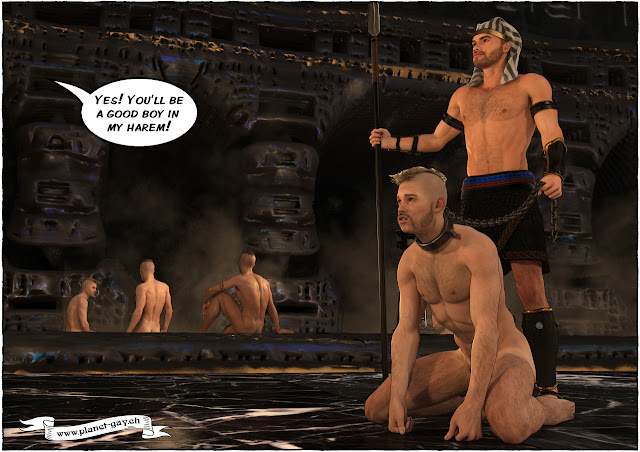 The judgement of Anubis consigns him to purgatory.
Awaiting his turn behind him, Jake trembles.
~
The artist behind Planet Gay has a refreshingly crisp style, populating his images with young men who look sexy and modern. I'm not usually drawn to 'costume' scenarios but his kilted guards look good and their dispassionate, knowing demeanour as custodians of the bewildered prisoners works well. He exploits the power of rendering to place the action of this piece in amazing settings reminiscent of the old Hollywood epics, but has the good sense to not let that grandeur overwhelm the story nor the attractions of the young men men who are the point of it. Jake's underwear makes an intriguing link between this fantasy world and real life.
I have fleshed out (and probably distorted) the storyline suggested in these images and their captions, intending to give it a little more characterisation and drama, but the pictures are unaltered and can speak for themselves.
Visit Planet Gay at DeviantArt for more
see also 'Domination Art by Planet Gay' at mitchmen blog
Posted by Mitchell at 08:49