1
The Lasting Appeal of Tom Of Finland 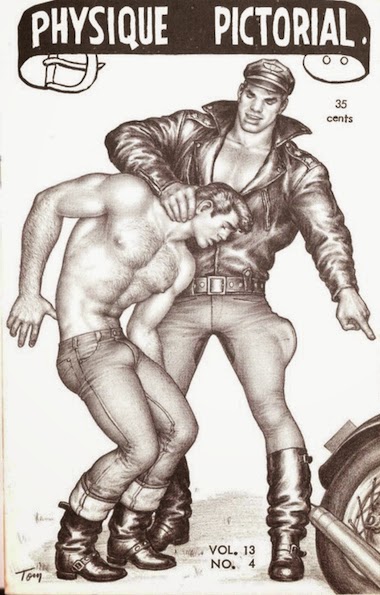 This erotic depiction of forced submission bowled me over. I had never seen anything like it before. As Valentine Hooven says* Tom's pictures are obviously homosexual and I felt a bit like Robinson Crusoe must have done when he discovered the footprint on the beach - there was someone else like me! So this picture has a special significance for me and I still love it. The artist of course was Tom of Finland and in the years that followed I sought out more examples of his pictures and my interest developed into a lifelong affection and respect for his work.

Disappointingly, the wrestling I avidly followed on the television, largely featured fat and ugly men in oversized swimming trunks (this was in the years before American hunks and razzmatazz). The handsome specimens I craved, with fine physiques like those Tom depicted, did exist (e.g. Spencer Churchill and Steve Veidor) but they were few and far between and they rarely seemed to lose or be on the receiving end of any of those humiliating and painful submission holds. But that word 'submission' neatly sums up Tom's scene, for the scolded hunk is only being coerced by a firm hand on his neck and his near-total compliance and humility is what makes this picture so enjoyable. In the story the careless biker's contrition has been encouraged by a spanking from the aggrieved owner (below), but I don't think you need to know that to enjoy his downfall. 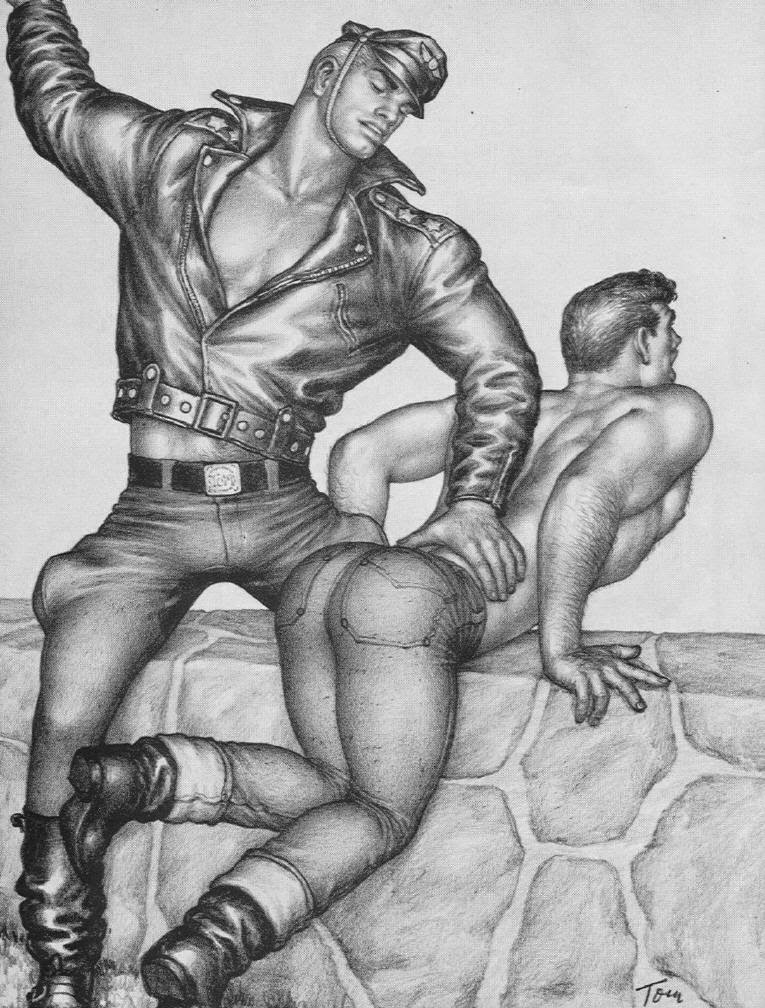 Tom's picture captured and made more real my hunk control fantasy, but it also moved it out of the artificial wrestling arena and into the real world. Hunky, handsome men like this could be seen on the streets and the fantasy of seeing them dominated and controlled thrilled me. The losing man in Tom's tussle was wearing tight jeans, which were everyday clothing and surely the most erotic male garment ever invented. Tom seemed to be able to wring the last drop of sexiness out of the garment. He captured the skin-hugging texture of denim and the characteristic, eye-riveting creasing around body joints. Take the time to savour it in all these pictures here.

It was really this alluring, sensual drawing style that first gripped my attention all those years ago and forms the basis of their lasting appeal. The men's bodies are a beautiful blend of muscularity and litheness and Tom's subtle shading perfectly captures the soft shaping of faces and the rounding, undulations and folded crevices of well-built bodies. The flicks of hair on chest and arms were perfectly calculated to symbolise raw natural manhood, just enough of the beast to excite. You can tell Tom saw men as beautiful creatures and they are unquestionably men not boys. Much of the art of his contemporaries (Spartacus, Art Bob and MacLane, Harry Bush) featured males who were distinctly boyish or in the case of Quaintance, highly stylised, classicised and almost feminised in some cases - and absolutely hairless, due of course to the prudish publishing constraints of the day. 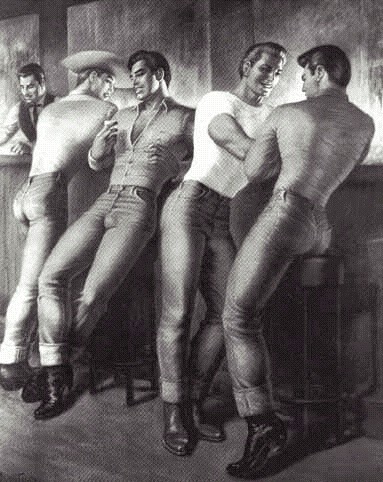 To give him credit though, Quaintance, whose work Tom admired, did produce sexy depictions of men in jeans, bulges and all, and his picture, Saturday Night, could easily be mistaken for Tom's work were it not for the glamorised, Latin faces and slicked up hair. (Perhaps the gay sexual revolution of the 60's should be attributed to jeans rather than Tom!)

You can see in this work too a similar seductive style using light and shade to highlight the attractions of the male physique. This painting seems to be partly inspired by the dramatic use of light and shade by classical masters (see example No 1 , No 2), but I believe both these artists were really drawing on something more mundane and much closer to home – the female glamour art of the 40s and 50s. Memorably represented by the paintings on US combat aircraft and advertising campaigns of this era, this art featured beautiful, shapely young women in saucy or alluring poses, in idealised but everyday clothes and in situations which were just about decent but sometimes very naughty. (there's an example here – beware it's female!) Natural endowments were subtly enhanced and the colouring and shading of the picture was specifically designed to highlight those shapely curves, not to introduce drama or atmosphere like the Quaintance above.
There's a wider selection at Female Glamour Art by Gil Elvgren.


Tom adapted this concept for the male form substituting masculine clothing, traits and characteristics and developing his own pencil version of the figure-flattering shading technique. As it happens, the subdued toning of pencil drawings quite suits the male subject matter and distances the work from the frivolous, female equivalents. By more good fortune also, Tom generally drew clothing - jeans, t-shirts and leather jackets - that is pretty much timeless and I would think an 18 year old today can enjoy it just as I did then. By contrast Elvgren's art remains rooted firmly in it's era and it's original erotic power, deftly fashioned to suit the conventions and fashions of the day has much diminished for modern eyes. 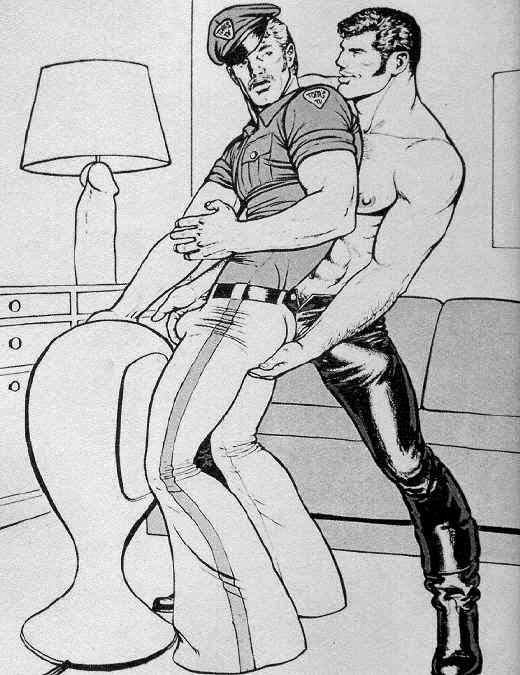 You can easily get a sense of the deadening, filtering effect of time by looking at other Tom images which incorporated fashionable clothing, like the TV repairman (and his Scandinavian space age TV!) from Kake 11. In their day those flares were alluring and highly desirable but now look rather silly and frankly un-Tom-like. (For another scary example try Ringo and the Renegades).


However, this image is redeemed by it's portrayal of forceful, impertinent seduction. Groped on two fronts, the advance is as frightening as it is unexpected, to judge from the quarry's face. His own submission is yet to come but if the offending flares are cropped out, it earns a place as another Tom classic of dominated manhood .


As an aside, note also the table lamp design, it adds humour and clarifies purpose (as if that were needed) but not every artist would choose to employ a penis shape in quite such a penetrated way, it seems to suggest Tom had an interest in rather more advanced forms of sexual entertainment. 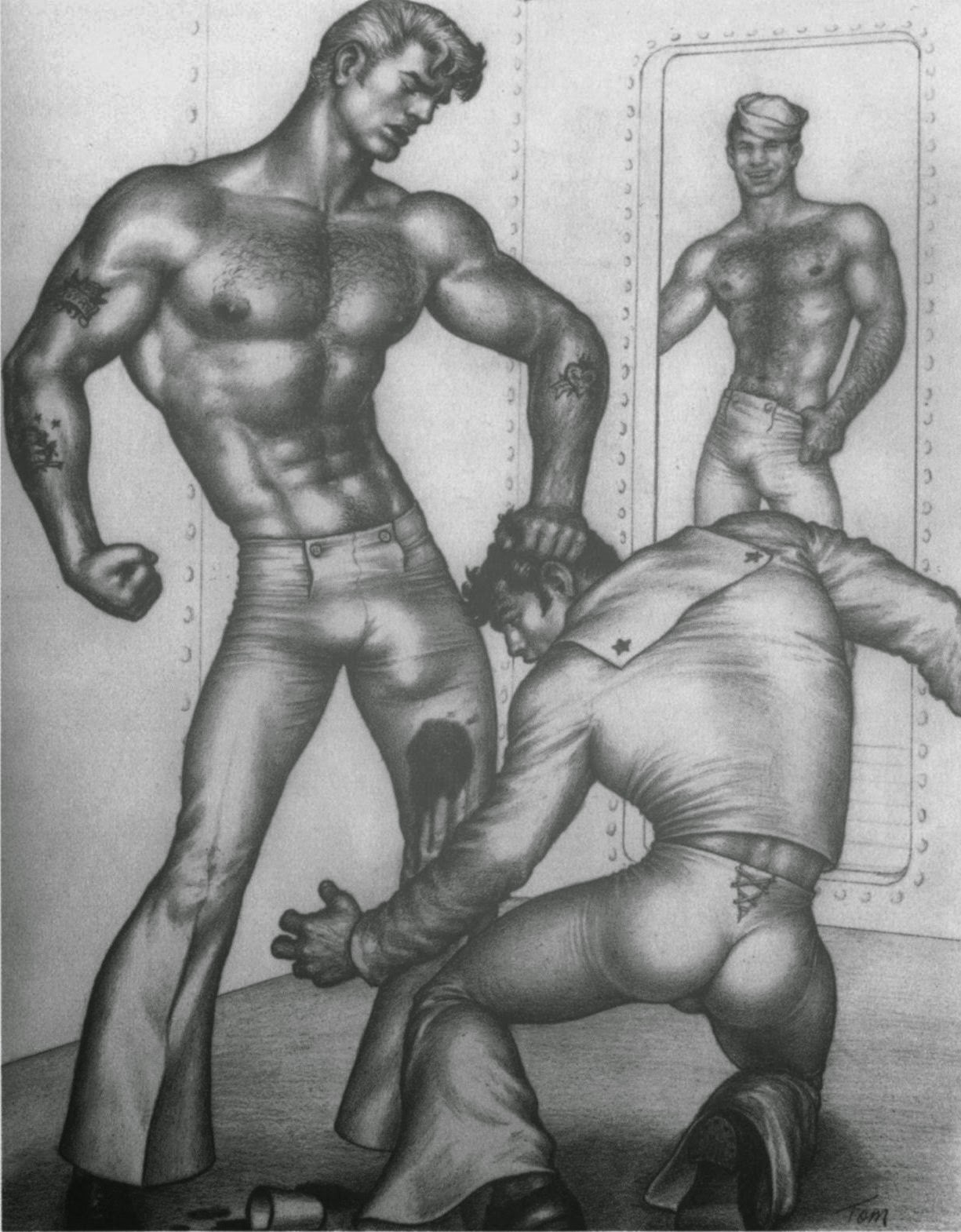 It was some years later when I discovered that the Careless Motorcyclist image which I fell in love with is actually a reworking of an idea from an earlier picture which I have called 'Careless Sailor'. It's very similar in concept and features another iconic stereotype - the sailor in summer whites (sailors enjoy honorary exemption from disapproval of flares!). In this picture the sexual imagery is barely 'hidden' at all, although it's more sophisticated than it seems at first sight – see how the tip of flaccid cock outlined in the blond sailor's trousers is positioned just above the wet stain, it's as though the action has just finished rather than just being started, as you first imagine.


The grovelling, cowed sailor is a beautiful creation and seems to have the same face as the motorcyclist (a continuity that adds the spice of repeated humiliation) but this depiction of him is much more erotic, outstandingly so. His memorable bubble butt is cleverly framed and shaped by side-creases in his trousers but the tightly laced-up waist, contrasted with the glimpse of ball bulge between his open legs makes him seem enticingly unprotected and vulnerable down below. His broad manly shoulders and upper torso add pathos to his plight, the depth of his humiliation, because the sense of him being dominated and forced to his knees, is even stronger in this picture. However, for some reason the pairing of the two men is not quite as successful, the leaning back pose of the top and the more prominent sexual element seems to diminish the sense of anger and threat compared with the biker picture. 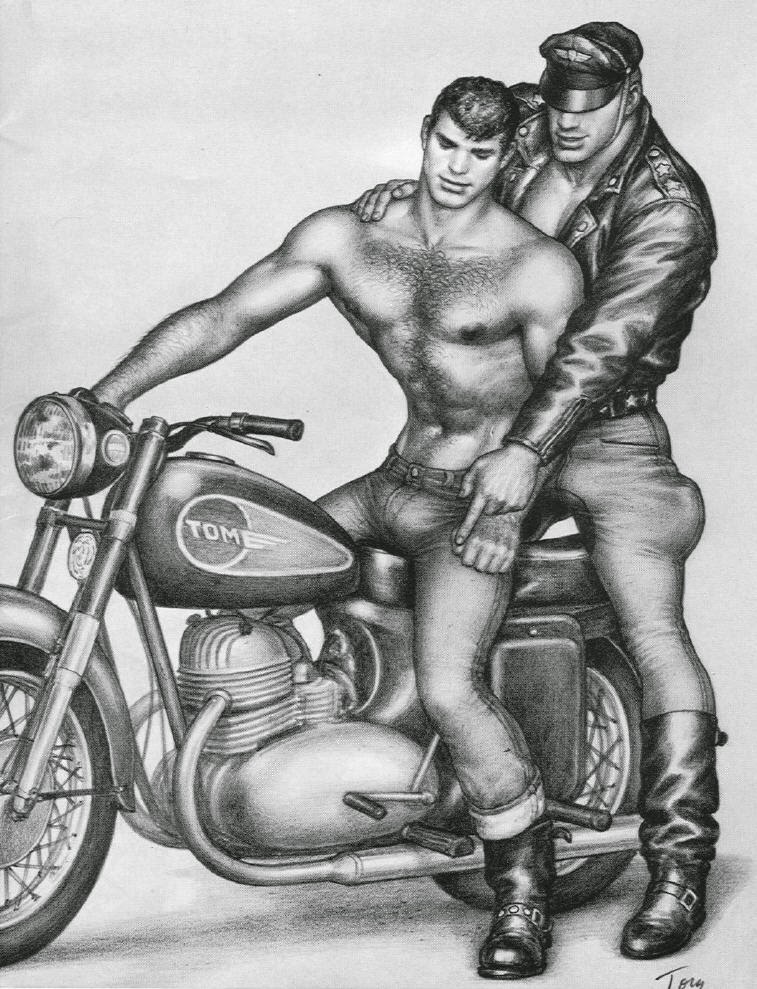 6 Tom of Finland – Careless Motorcyclist No1

These days Tom is often portrayed as a cuddly, father figure and liberationist and in fact the first image in the biker set (above) is a rather heart-warming, mentoring scene in which the wayward cyclist is given instruction in how to start the bike (but unfortunately not how to stop it!). Needless to say the instructor's hand secretly hovers close to an enticing denim mound, but leaving that aside, the affectionate friendship illustrated here (there isn't any obvious age difference) certainly demonstrates Tom's human warmth and his desire to show affection between men as being normal and beautiful.


Which makes it all the more surprising then that the scene should transition so quickly to anger, spanking and humiliation. Admittedly the final scene (daringly featuring full nudity) does show smiles and suggest reconciliation, but there's a similar paradox in the 1970 picture 'Tethered” (see my recent article 'Just out of Reach' ) where a leather man reacts badly to the efforts of a rather well-hung, young Adonis. Is it just meaningless humour and fantasy? Well perhaps, but Tom is so good at depicting this harder edge that it has to be taken seriously. You can't portray anything well in any art form unless you grasp and know the underlying feelings and motivations. For me it's this harder quality that makes Tom's work great, it's the reason why he appears in this series and I will naturally focus on it, but I believe no assessment of his accomplishments is complete without acknowledging it.

For other artists in the A-Z series click on the label below or search by name.


For more articles on 'hidden eroticism' click on the label below