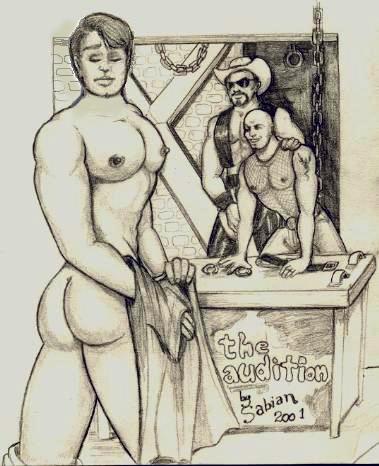 Sabian - Auditioning
We kick off the letter 'S' proper with Sabian. Sabian's style looks vintage in more ways than one, but he's still around drawing young men with exceptionally well developed pectorals, eternally taking the role of 'sub' in fetishistic scenes. In the first picture this character takes centre stage but, interestingly, the two 'cowboys' in the background seem to have attracted most of the artist's interest. They are depicted with more care and have distinctive features and clothing. Most of Sabian's work (that I have seen) is not as polished as this, but the supporting cast always seem that bit more interesting than the 'hero'. 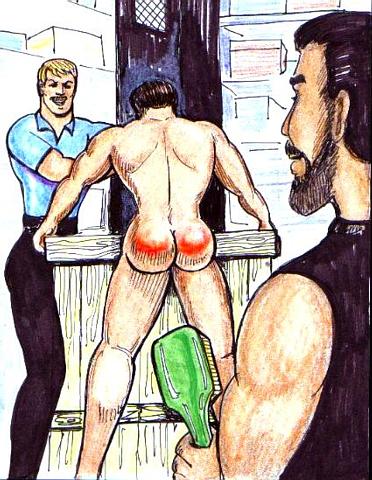 Sabian - Punishment In The Stockroom

The second picture shows more unusual and vintage-looking, male domination stereotypes and the anonymous, sketchily-drawn, sex-object victim. It's a hot domination scene and the unusual setting of a warehouse, with the naked victim forced to carry heavy crates, gives the image punch. I detect the influence of Tom of Finland in the face of the 'blue shirt guy' and possibly also in the placing of the principal tormentor in the foreground to create drama and depth. However, the architectural awareness and soaring height suggested by the background window is not Tom at all but highly original. We're not talking high art here, but it's pretty atmospheric story telling. 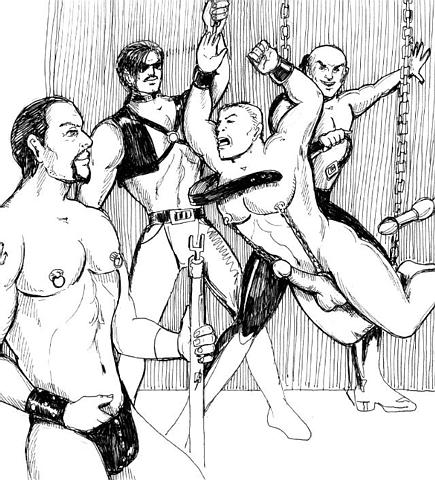 'Chest Lashing' is a more mainstream, fetish, dungeon scene featuring those over-developed pecs on another victim and another retro 'dom' complete with cool shades. The backward arch of the captive's suspension is erotic and a true torture and despite the improbable angle of attack there's a real sense of painful impact by the lash. The foreground 'devil' with his electro-prod, waiting his turn adds depth to the image and grit to it's storyline. The style is casual and sketchy but there's a degree of sophistication in the simple background wall effect and the fading out of shading in the lower legs, replaced by simply drawn crease lines so they don't distract from the main focus of the picture. You may have seen this technique used most successfully by Bill Ward in his 'Drum' comics. 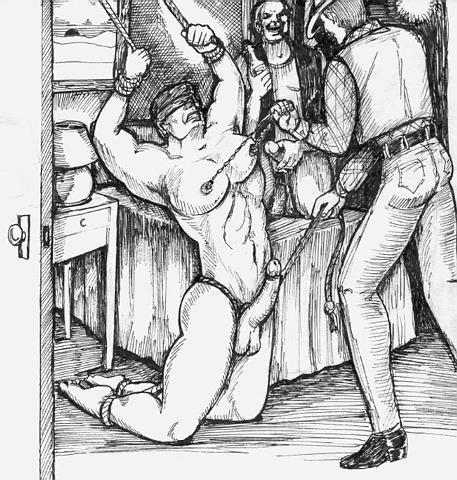 A puzzling title but the final picture is my favourite. The tied and tormented body-builder appears to have been taken captive while sleeping and once again drama oozes out of the picture. The background laughing villain is a great creation. At times Sabian's victims have a distinctly feminine appearance in both body shape and stance but unlike some other artists (e.g. Bishop) they are not obviously adapted from female originals. Sabian's work is a flagbearer for male pec fetish.

There's a small selection of Sabian's images at Pridesites Pecity and an interview in Pridesites Pec Mag. There's a link to his site on Flickr but it wouldn't work for me, I'd welcome info on his current whereabouts!

For other posts in this series, click on the A-Z label below
or search for an artist by name
Posted by Mitchell at 09:12

He use to have a yahoo group but that closed down. Unfortunately no idea if he still does drawings