This arrest and abuse sequence is taken from 'Weekend Lock-up', a 1977 Falcon video starring Al Parker, Will Seagars and an actor identified as 'Roy'. 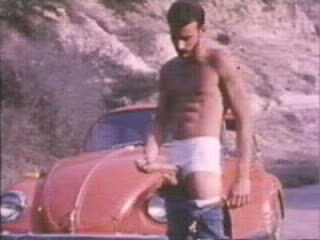 1
Parker stops by the roadside to take a piss......
His choice of vehicle suggests this is a down-to-earth type of guy. 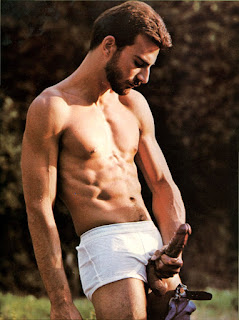 2
…...the piss stop develops into a sensuous manipulation session.....

At this time Parker's physique was lean and clean looking and his hair not as wild as it became later. I know many readers hate these high-waisted Y-fronts, but to me, the severely functional design suggests a practical garment not intended for public show, worn by a man who is normally modest.
Anyway asses look great in them when they are pulled up tight! 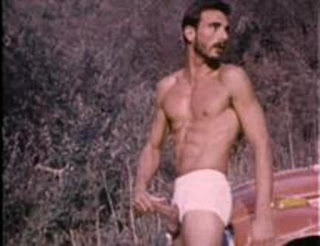 3
….Parker's ruminations have just borne juicy fruit when he is interrupted
by two cops who arrive catching him with his pants down. 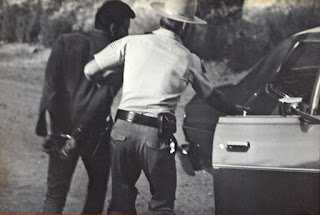 4
The cops make him to correct his dress, then cuff him and run him in.
There's a short clip of the arrest sequence here.

these images are copyright Falcon Studios
Posted by Mitchell at 15:43