I don't usually feature photo manips in this blog, the recent article on 'Priapus of Milet' being a notable exception. It's partly an unintended consequence of my focus on traditional art in the 'A-Z of Fetish Artists' series. I deliberately excluded computer art from this survey to keep the size of the project managable. Four years on it amazes me that I've not yet found space to laud the prowess of major fetish artists like Baron, Borg and Herodotus. It's a major oversight on my part which I will have to correct! 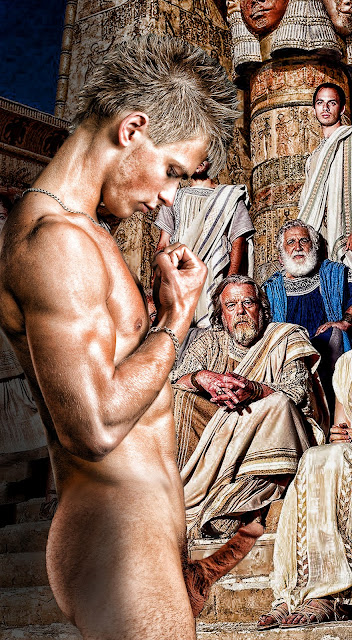 This is a straightforward marriage of two images but cleverly done, the noblemen's eye-lines seem spot on.  The sensuous 'man-boy' in the foreground is not your normal slave material. Muscular yes, but too slightly built for hard labour. That bold erection, not to mention the wild spiky hair and blemished face suggests he'd be quite a handful as a boy lover. No wonder the nobles look disturbed and perplexed by this display!
Only the young man at the back allows himself to lust. 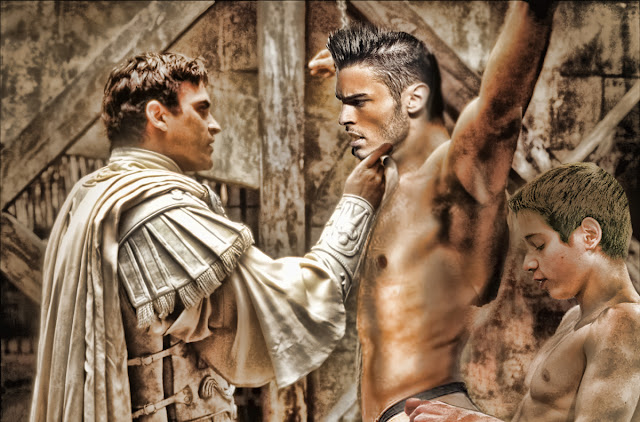 Blaze - The Power of the Emperor

This is not as successful technically as my first example, but it tells a great story. The handsome young warrior held at the mercy of a sadistic captor is classic fetish stuff. Virtually every Hollywood epic and every Bound Gods video contains a scene like this but that doesn't diminish it's power. The finger stroking the stubbled chin is a cliche too but the facial expressions here make it intensely erotic. Calculating lust on the one hand (is that Lawrence Olivier?). On the captive's part, there's a delicious mixture of incomprehension, anger and fear as he senses that unconventional trials lie ahead.

Blaze's work includes a fair amount of celebrity head transplants,
many of which are unknown to me and sometimes too 'teeny' to be of interest (Justin who?).
But can any readers ID this manly captive for me? 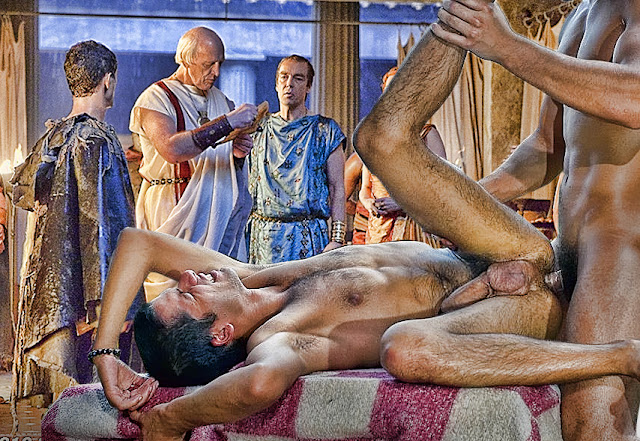 Blaze's captions add greatly to the content of his images, in this case wryly bringing to life the well-known workplace complaint. The nobles find the message more interesting than the fate of the messenger, thereby conforming to executive stereotype in a way that many of us will recognise and enjoy. This is another clever foreground-background combination, successfully blending separate images.