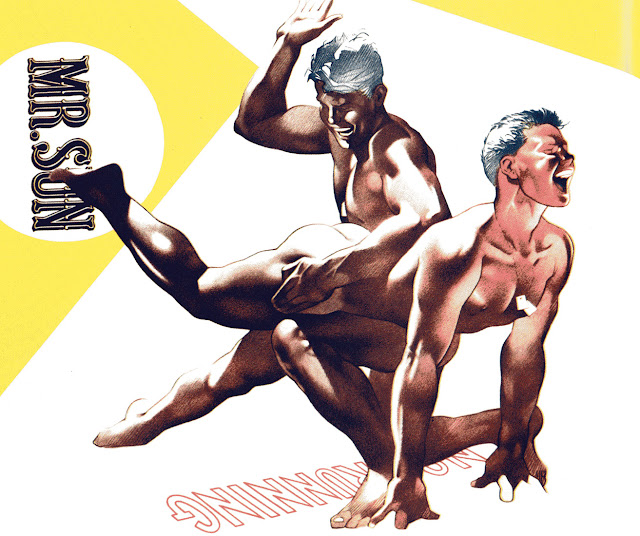 When I covered the letter 'B' in my A-Z in 2008, I mentioned Harry Bush but described him as 'not fetishy enough' for a full entry. At that time I was aware of the familiar 'No Running' spanking image above, but it seemed altogether too frivolous for serious fetish consideration.
. 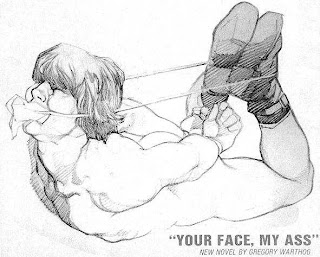 Harry Bush - Your Face My Ass
.
Even this rather good, hog-tied man he did for Drummer magazine seemed seemed to be outweighed by the preponderance of surfer pin-ups like those featured in my recent 'bikini boys' post which appeared to show Bush as a man to whom the male figure was primarily an object of beauty and romantic desire.

However, since the publication of the 'Hard Boys' collection featuring previously unseen, harder works by Bush, however, I have changed my view and am here belatedly recognising Harry's fetish credentials.
. 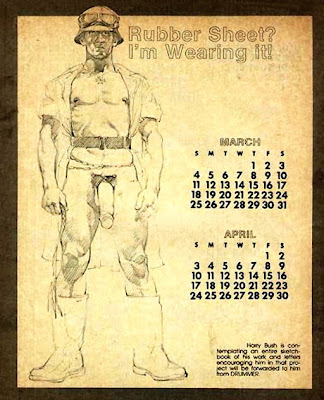 This illustration for the 1985 Drummer Calendar gives a glimpse of his darker interests, despite the light hearted caption. The scary storm-trooper is one of several images based on photos done by our old friends 'Guys in Uniform Studio' (see GIU/Royale label for more on Guys in Uniform)
. 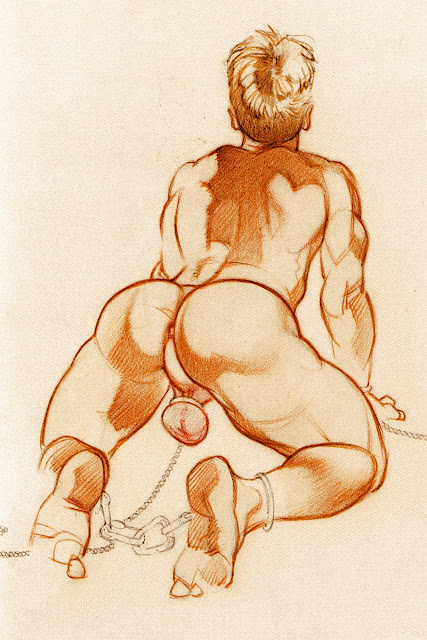 Bush's teenage lads sometimes explicitly push modern boundaries on age, and he also gives them baby-like, puffed-up, cherub cheeks (as in No Running) but he doesn't leave you in any doubt about their sexual maturity. This beautiful, chained-up, young man is presented without frivolity, he's not even disguised as a Roman slave and could hardly be bettered as a domination image. The crisply defined shadowing is typical of Bush's polished drawings and the style has some similarities with that of his contemporary Steve Masters.
. 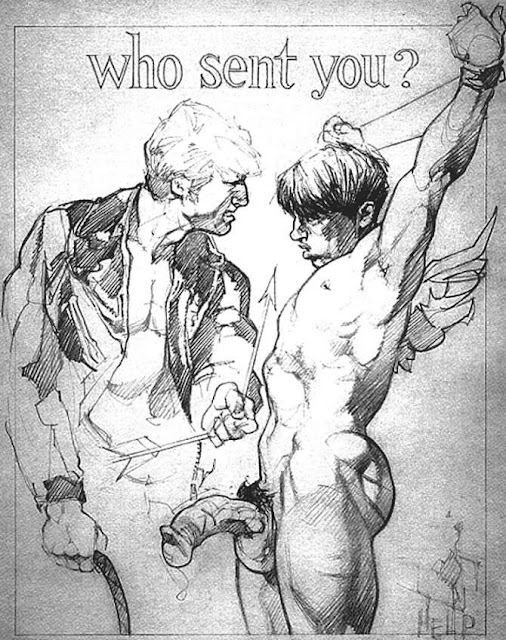 Harry Bush - Who Sent You?


'Cupid' scenes are a distinctive, recurring feature in Bush's work but surprisingly they are not portrayed as innocent, cherub-like surfers but cunning, highly sexual, young men sent to taunt and trick their long suffering elders (as in 'who sent you?' seen here).

This is a development of the earlier 'bikini boys' temptation theme in which hunky, young surfers cause men passing by to explode with lust or to crash their cars off-screen. Later they transform into hustlers extracting money for small favours. By this time, however, Bush's attitude has changed completely and even the Cupid's angelic connections do not save them from being punished for their mischievousness, in this case being restrained and flogged. In this picture Bush's drawing style helpfully disguises the weals on Cupid's backside for the benefit of crusty censors. That whip also crops up unobtrusively in other Bush 'beefcake' images giving them quite a sinister slant.
. 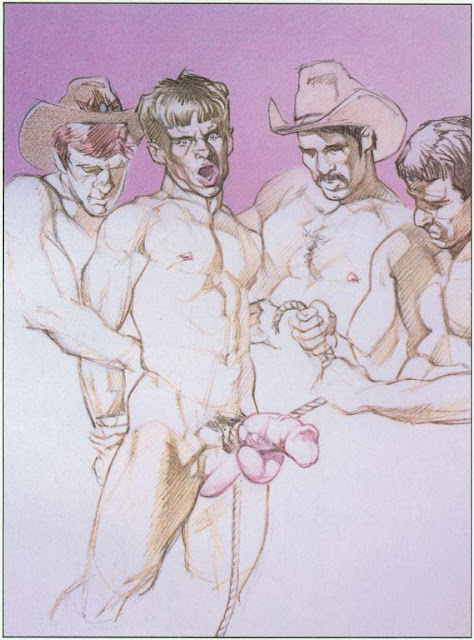 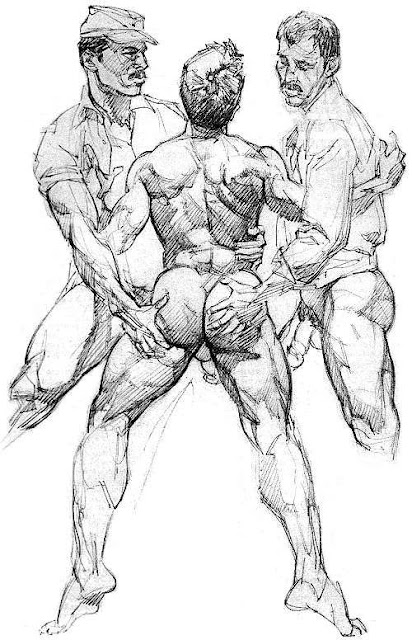 Harry Bush - I told you there was cherry material here

Other pictures by Bush show the complementary side of cross generational lust, with older men cynically exploiting youths they have ensnared. In the captioned version of this picture, the man on the left is saying 'I told you there was cherry stuff here' - here being the YMCA. To most of us these themes are little more than fantasies of masculine power, but it seems that for Bush they were all too typical of real gay life and he hated it.
.
This unhappiness might have been expected to trigger the production of more explicit punishment scenes, but if it did they haven't surfaced yet. Bush seemed to consistently shy away from explicitness in his pictures, even in the liberated 80's when he plainly became aware of dirty sex and his captions are occasionally quite coarse. But there is a clue in one image, hidden away at the back of 'Hard Boys' (not reproduced here). It's a portrait of two naked, young men who gaze defiantly out at us apparently caught in the middle of an extreme S&M session involving a knife and burning cigarette whose effects are plain to see. It's a fascinating, disturbing image, a million miles away from the surfer dreams, but one that clearly rubber stamps his fetish credentials.
Posted by Mitchell at 09:21

I love the thought and detail you put into your commentary, it's very rare for fetish art see this kind of depth.

Re: The Harry Bush article, I just noticed a couple details in "who sent you" for the first time (after thinking I was very familiar with it.

The area in the lower right that is the usual spot for an artist signature instead reads "Help"!

Also, I love the way the very lightly suggested details of the top's fly also suggest the bottom's cock is leaking precum.

It's a great piece, though "cuffed" is my favorite by him.

Thanks for the blog!.

Thanks for your comment. I must say it never occurred to me that it might be trouser fly! The 'Help!' logo seems to reflect Bush's complex character