Royale studio and it's successor 'Guys In Uniform' trod a unique path portraying men, not as beefcake or highly polished seducers, but as ordinary guys with natural looking, sexy bodies. They dressed them in clothing that signified male-ness and placed them into situations suggesting submission and subservience under the threat of military/authoritarian control. 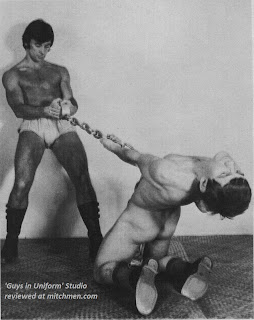 Guys in Uniform - Chained Nude
This Guys in Uniform image (sadly imperfect) is a classic domination scenario which looks back to the artsy AMG style. It's is unusual for it's virtually naked captive. The scarcity of frontal nudity and extreme forms of discipline in these pictures was dictated by the laws of the day and may initially disappoint modern tastes, which have become accustomed to high quality imagery of muscular bodies, exceptional erections and elaborate bondage and beatings. But for anyone who cares to linger, these pictures rekindle the lost art of anticipation, of savouring the plight of the prey. It's a process which is generally swept aside by the rush to nudity in modern porn and replaced by interminable studies of oral mechanics. 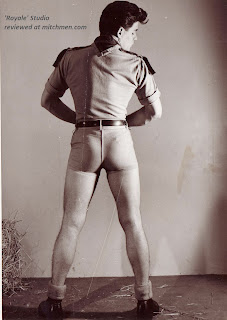 
I haven't covered all the GIU and Royale material that I have in this series and intend to return to the subject again in the future. I hope that posting the material will help keep it alive for future generations of gay men.
Posted by Mitchell at 09:45