As so often with Japanese artists, (and for which I apologise), I struggle with names but I believe Matsugoroh is also known by the name Ryuji. Anyway I have treated them as one for this article. 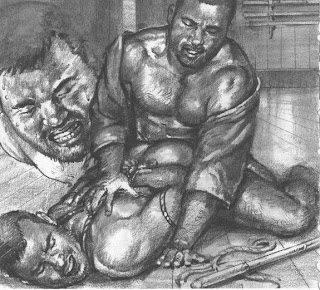 He draws young but decidedly chunky men in situations which often have the flavour of adventures with police interrogations, guns etc. The pictures usually involve bondage and conventional S&M 'torture' and abuse - although it's fair to say that sex is the primary thrust of his pictures not fetish for it's own sake. In keeping with his Japanese background, artistic rope bondage, staves and loincloths are much in evidence alongside the usual leather paraphenalia as in 'Rough'. He has a fondness for multiple pictures showing different aspects of the same scene. 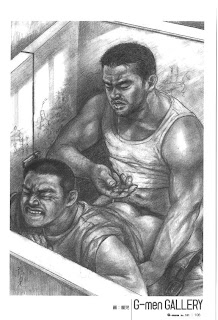 His style is natural looking and seems to involve airbrush as well as pencil and what seems like watercolour shading (although it's not in colour usually). This creates a roughly sketched appearance with wash like shadows but there is also a solidity about his men and a considerable amount of fine detailing - look at the facial detail in 'spit lube'. There's an element of mature artistry about the way he presents his pictures with striking close-up compositions and a good command of anatomy. 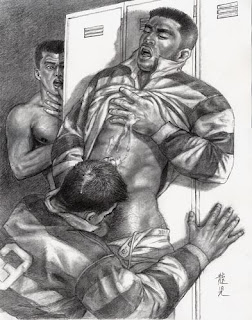 There is a rugby flavour in a number of his pictures which always earns a brownie point from me. They keep their kit on (not always in it's proper place!) and the shirts and shorts are nicely detailed - as are the locker room backgrounds. The crispness of this picture is different to the previous one - hence my uncertainty about identity - however the general style is similar and the Japanese characters (signature?) appears on both types in my collection. You can see here that his men are also unmistakeably japanese which I applaud.They do have some western touches - such as short, spiky hair and facial stubble. The facial expressions are notably varied and interesting although sometimes a bit theatrical and exaggerated like the rugby spectator here.

Matsugoroh is one of the less 'scary' M artists, his characters seem refreshingly normal and he presents his fetish, even the sleaze, in the same way. The result is still distinctive and striking.

I cannot turn him up on the internet although I know he contributes to G-Men. I suggest the best place to look for his work is at the GMBA archives and other art groups.