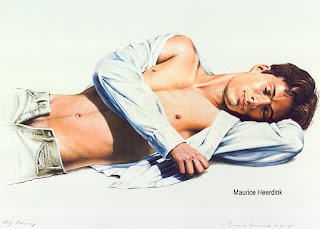 The detail is meticulous and painterly – the treatment of the hands for example. The skin tones have a slightly plastic appearance. So where's the fetish interest? Heerdink also produces pictures showing men in peril or even more bloodthirsty subjects like the legend of Prometheus shown here and the martyrdom of St Sebastian. 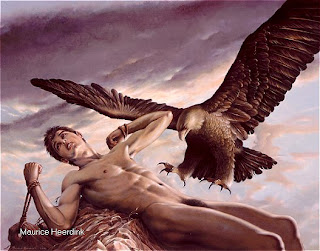 The treatment in Prometheus is Romantic with a capital R. Note again the slightly plastic skin treatment and the detail in the sky and the Eagle. These are such traditional subjects for artists generally that the S&M overtones can be overlooked but the vicious claws and alarm of the victim, who appears to be appealing to an unseen attendant, don't leave much room for doubt.
.

This imagery is an interesting reminder of the bizarre role of religion and literature as vehicles for fetish imagery through the centuries – apparently unquestioned - before the subject came out into the open.
.
Look out for the snake picture at his site :-
http://www.mauriceheerdink.com/
.
For earlier articles in this series click on the A-Z label.