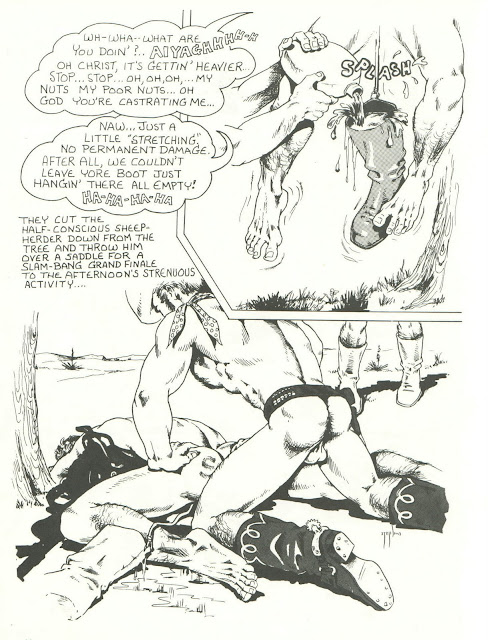 Etienne published a number of comic book stories under the name Stephen. The style of these pictures is simpler than those we have looked at so far. The original small format (A5) doesn’t permit the best reproduction and some of the detail is lost, but the originality of the ideas shines through. 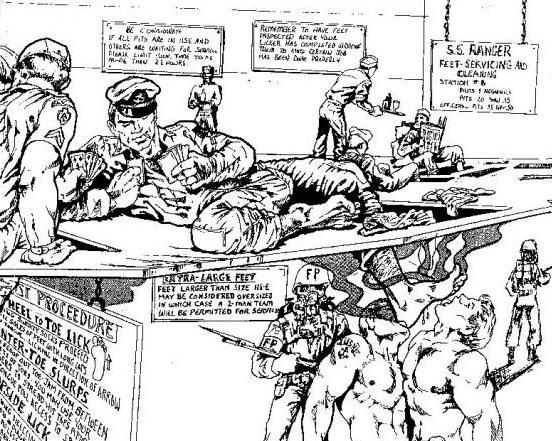 In these pictures Etienne’s interest in feet becomes highly apparent. For me, he perfected the representation of the essence of male ‘foot-ness’. The USS Ranger comic strip is probably less well known than his others and deals extensively with foot (and sock) fetishes - sniffing, licking and sucking. My favourite scene (above) is of 2 naked young sailors compelled to lick clean the smelly feet of the more senior crew members.

Another of these comics - Prince Tannahide - is built around spanking. The historical costumes are a turn-off for me but the story includes an excellent face-sitting scene (above) where the Prince's would-be rescuer, a leatherman, gets a taste of the villains cruelty. A Prince Tannahide colourised version has been published at http://jockspank.blogspot.com/ (post dated Sunday 7th Dec 2008)

More Etienne in my next post
Posted by Mitchell at 08:16